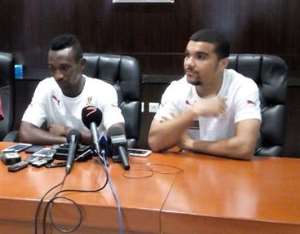 By Ameenu Shardow
Follow on Twitter @alooameenu
Striker Kwesi Appiah says he is always preparing himself to play for Ghana at the 2015 Africa Cup of Nations.

The 24-year-old is yet to make his competitive debut for the Black Stars despite impressing during the team's training camp in Spain.

The Crystal Palace man scored in his first game for Ghana – the friendly win over second tier Portuguese club Olhanense.

Appiah's role with the Black Stars has since been limited to warming the bench at the 2015 Africa Cup of Nations.

Even a half-fit Asamoah Gyan was rightfully picked ahead of the ex Peterborough player in the epic 1-0 win over Algeria to serve as ample proof of Appiah's diminishing international fortunes.

But the striker says he will keep preparing himself for the unlikely chance of being called up to play for Ghana at the tournament being staged in Equatorial Guinea.

“The manager is the one to pick the team and we always support the team he picks,” he said.

“Everyone on the bench is ready to play when the times comes.”

Ghana is favourites to beat South Africa in their final group game of the 2015 AFCON on Tuesday which will secure their qualification to the quarter finals.