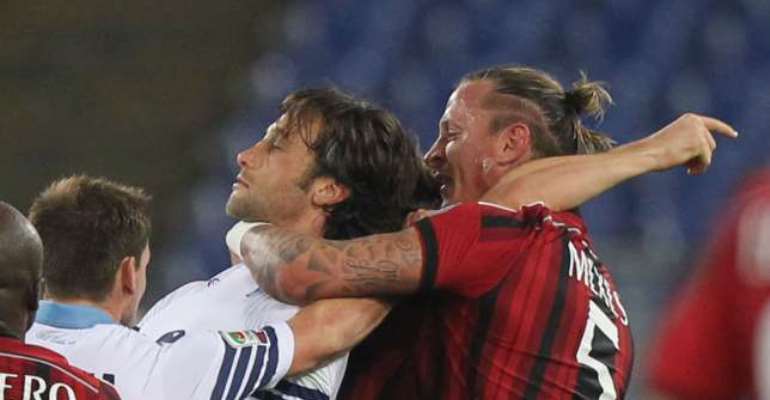 Philippe Mexes has apologised for his injury-time sending off in Milan's 3-1 Serie A defeat at Lazio.

Milan's miserable evening was capped off when Mexes saw red for grabbing Lazio's Stefano Mauri by the throat in the closing stages as tempers flared in Rome.

"I have to apologise to the club, the coach and my family," said the defender.

"It was the wrong reaction and I am sorry because I left the team with 10 men and I will be suspended.

"Unfortunately I made a mistake, in my career I have had these reactions. These things should not happen out on a football pitch."

Milan have the perfect opportunity to exact immediate revenge when they welcome Lazio to San Siro for the Tuesday's Coppa Italia quarter-final.

And Mexes has called on the team to put in a performance to lift the pressure on under-fire coach Inzaghi.

"We have to bounce back," he added. "We're all close with the coach.

"We will try and resolve this situation which isn't nice and to do so we have to win and not have reactions like mine.

"Every match has to be like a final and the one on Tuesday even more so as we have to get back on track."