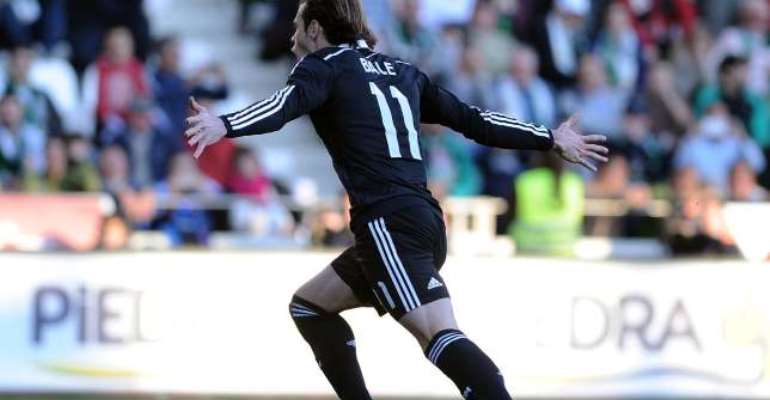 Gareth Bale's last-gasp penalty stole an unconvincing 2-1 win for Real at Cordoba after Cristiano Ronaldo had been given his marching orders.

Ronaldo was given a straight red card for kicking out at a Cordoba defender with the score deadlocked at 1-1 eight minutes from time at the Estadio Nuevo Arcangel on Saturday.

However, Bale spared his team-mate's blushes when he converted from the penalty spot in the 89th minute after his own free-kick had been handled - with Cordoba's Federico Cartabia receiving a second booking for the offence.

Real remain a point clear at the top, but Carlo Ancelotti will be concerned by his side's performance and the fact Ronaldo - who cut a frustrated figure throughout the clash - could now face a three-game ban for violent conduct.

Neymar and Lionel Messi both scored twice as a ruthless Barcelona hammered sorry Elche 6-0 to stretch their winning run to six games.

Barca had already beaten Elche three times this season - and scored 12 goals in the process - ahead of the La Liga clash at Estadio Manuel Martinez Valero and the Catalan giants heaped more misery on Fran Escriba's struggling side on Saturday.

Gerard Pique marked his 200th La Liga appearance with the opening goal in the first half and Barca ran riot in the second, with Messi scoring from the penalty spot before Elche had Faycal Fajr sent off for a second bookable offence.

The majestic Messi then laid on two goals for Neymar, who struck twice in as many minutes to take his goal tally for the season to 19 and Messi added Barca's fifth with his 31st of another outstanding campaign before Pedro got in on the act in stoppage time.

The France international was in lethal form for the champions, scoring twice in the first half and playing a pivotal role in the third - an own goal - as Atletico eased to a routine triumph at the Vicente Calderon.