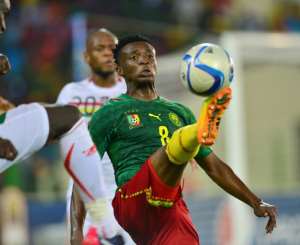 Guinea and Cameroon continued to struggle to claim full points in their second matches of Group D at the Africa Cup of Nations as they held each other to a 1-1 draw on Saturday night.

After plenty of scoring opportunities which both teams created, the match ended with goals that came in from the first half courtesy of Benjamin Moukandjo and Ibrahim Traore.

In the first five minutes of the match Cameroon nearly took an early lead when Florentin Pogba made a mistake at the back by giving the ball away, but Edgar Salli wasted that opportunity.

Cameroon continued to attack as in the 10th minute they came close to scoring another goal when Henry Bedimo's shot was well saved by Guinea keeper Naby Yattara.

Three minutes later Benjamin Moukandjo opened the scoring for Cameroon through a corner kick that he took which beat the goalkeeper at his near post to put his team in a 1-0 lead.

As much as Guinea attacked, Aurelien Cheudjou had the defence solid at the back as he denied them access to take any shots.

Guinea tried to come back strong in the 35th minute when Ibrahima Traore made a forward run and pulled a left footed shot, but 19-year-old goalkeeper Joseph Ondoa pulled a brilliant save, proving why he is playing in Barcelona.

In the 42nd minute, after a good build up, Guinea captain Traore's efforts were finally rewarded when he pulled in a great grass cutter shot just outside the box which Ondoa could not reach to put his team at 1-1.

In the second half Cameroon came all out in full force, not giving the Guinea defence any time to breathe.

Guinea caught a wake up as Soumah nearly broke into the Cameroon defence to put his team ahead, but Chedjou continued to defend solidly.

After this incident Cameroon created two scoring opportunities but selfishness cost them an opportunity to score goals.

In the 74th minute substitute Naby Keita, who came in for Seydouba Soumah, came close to finding the back of the net but his shot just went inches over the cross bar.

Six minutes later the Guinea goalkeeper made a brilliant save, risking his life to deny a cross from Frank Etoundi, who had replaced Vincent Aboubakar.

The last chance that Cameroon had arrived in the 90th minute when Stephan Mbia headed wide. This saw the two teams finishing with their second draw in Group.