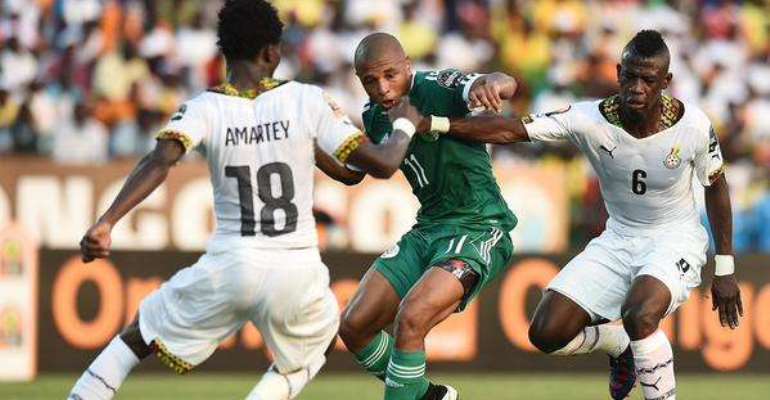 Razak Braimah 7/10 - A quite night for a goalkeeper who is slowly growing into the position. Dealt well with aerial situations and distributed well.

Harrison Afful 7/10 - The right back put in a couple of teasing crosses from the right as he proved a useful counter attacking outlet for Ghana. One of his crosses almost met with a goal as Gyan glanced his header wide. Was at his intelligent best as well with his ability to play nifty one-two's out of dangerous areas.

Daniel Amartey 7/10 - Continues his steady rise an international after another assured appearance in central defence. Read situations well and set up Ghana attacks with his passing range.

Jonathan Mensah 7/10 - A positive response to his poor performance against Senegal, he organised his defence well and coped excellently with the dangerous Belfodil. A much better understanding with Amartey as well.

Baba Rahman 5/10 - A quite performance from Rahman who it seems has been told not to drift into too many offensive positions. Dealt well with the threat of Taider.

Afriyie Acquah 7/10 - A powerful performance for the Parma man. Broke up Algeria's slick interplay and pushed Ghana forward at a time when they looked fragile. His substitution was to protect him and not a slur on his performance.

Agyeman Badu 6/10 - A mixed bag from the midfielder. His passing is not his best attribute but his energy is legendary. Tracked all over the pitch and made life uncomfortable for the dangerous Yacini Brahimi.

Andre Ayew 6/10 - Should have scored with a free header in the 71st minute but that was as good as it got for him. Laboured for the team but he is capable of so much more.

Christian Atsu 7/10 - The Everton man was a man under pressure and played his best game in a while for the Black Stars. His dribbling ability made him a nightmare to defend against for Ghoulam.Tired early in the second half.

Jordan Ayew 6/10 - Continued his Jekyll and Hyde act with the Black Stars. Drifted from his strike partner Gyan too often to benefit from knockdowns. Best moment was a moment of magic when he flicked a shot at goal with a backheel.

Asamoah Gyan 8 /10 - A quite first half for the returning captain but he turned on the heat in the second half as he flashed a header wide. Also got on the end of a Jordan Ayew pass he should have buried. He is however Ghana's record scorer for a reason and he delivered in typical fashion with a goal that gave life to Ghana's AFCON dreams.

Substitutes
Mubarak Wakaso 7/10 -Replaced Afriyie Acquah who was in danger of attracting a red card and gave purpose to Ghana's lethargic midfield with his incisive range of passing. Laid the assist for Gyan with a hopeful long ball

Mahatma Otoo 4/10 - Replaced Jordan Ayew to add some speed to Ghana's attacks.  Defended from the front but did not cause too many problems defensively.

Solomon Asante 5/10 - Made a nervy entry into the tournament. Struggled with his first touch and his delivery was not the best.