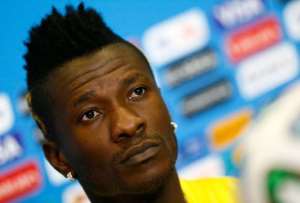 Although the Ghana Football Association have suggested that asking newly appointed coach, Avram Grant, to lift the trophy would be unrealistic, but the Black Stars skipper remains confident ahead of the tournament.

'We are going to Equatorial Guinea to win the trophy. It is the attitude we go to every tournament with,' he told  BBC Sport .

'A lot will depend on us, the players, and hopefully we can make things easy for the new coach.

"Our main focus is to lift the cup. It is not all about me but it is all about the team.

'Even if I don't get the tournament I want and Ghana wins the cup I will be proud. That is what we are preparing for.'

"All three countries in our group are in very good form,' he added.

"South Africa did not lose a single game and Algeria have been very, very good.

"They are all looking great and that will make the tournament very difficult for us but we are confident.