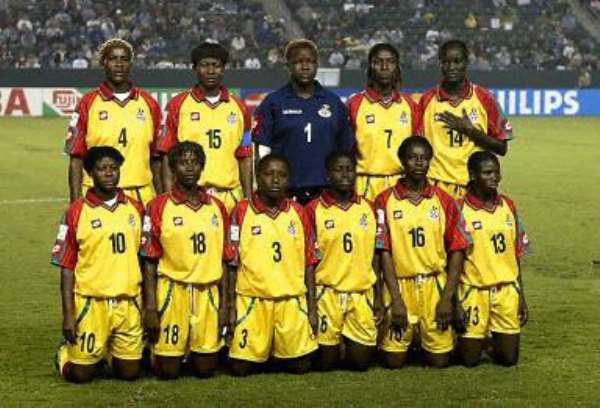 The Queens made their intentions known from the blast of the whistle with series of onslaught, which saw the noisy thick crowd applauding the Ghanaians who overwhelmed their opponents with good inter-positional play spiced with flair and amazing precision. Okoe opened the floodgates in the 10th minute when she capitalized on good exchanges with Bayor.

The Guineans reacted swiftly and almost succeeded but for an offside trap, which was craftly set by the Ghanaian defence, built around Mavis Danso.

Having set up Anokyewaa to head home the second goal four minutes later; Bayor made it three in another four minutes interval when she profited from a Gloria Oforiwaa's set-up.

At a time the Guineans seemed to have succeeded with their offside trap; Anokyewaa broke lose and tore through three defenders before scoring her personal two and Ghana's four.

Okoe became the first to register the first hat trick when she scored two classic goals within 12 minutes only for Bayor to score the 7th afterwards.

Mamuna Darku justified her return into the team after months of injury with an incredible 30-metre long drive that rendered goalkeeper Diallo Aissata helpless.

Anokyewaa followed with a second hat trick on the stroke of half time with a glancing header.

As if by specific instructions, the Guineas played strictly to their idea of off side, which perfectly worked to their advantage. However, their efforts were not enough to prevent Elizabeth Baidoo from netting the 10th goal which.

The appetite of the Queens for goals grew stronger as the few Ghanaian supporters present cheered them on.

Bayor however, scored when it was six minutes left for play while Anita Amenuku, who was making her debut finished the demolishing job on the stroke of time.

Black Queens coach John Eshun has expressed satisfaction with the performance of the team after it thrashed Guinea Conakry 13-0 in their African Women Championship qualifier played in Conakry.

"I'm overwhelmed about our performance because I was expecting a lesser goal margin", the coach told GNA Sports in Conakry after the game.

Coach Eshun was however, not surprised about the game's outcome. "We're really prepared for the game, and it was our intention to qualify here to render the second leg a mere academic exercise." The coach praised the girls for their effort, saying they played to instructions.

He told GNA sports that the Queens exhibited high tactical discipline and was hopeful that the team will maintain it in the return leg billed for Accra in two weeks.

The coach was convinced that with enough trial games, the team would emerge unbeatable before the Championship, which was slated for South Africa later in the year.

The team is expected home on Monday.