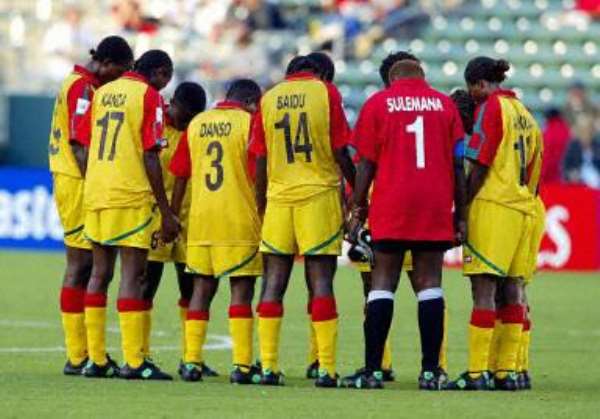 Accra, July 6, GNA - A contingent of 18 players and seven officials of the National women soccer team, the Black Queens will leave Accra on Friday for Guinea to begin their qualification towards this year's African Women Championship scheduled for South Africa.

The team is scheduled to play its first leg match against the Guineans on Sunday, July 11 before taking them on in the second leg in Ghana on July 24.

The team is dominated by most of the players who featured for the Nation at the last Women's World Cup competition in the United States. Among the players making the trip are goalkeepers Memunatu Suleimana and Fati Mohammed. The defenders are Aminatu Ibrahim, Patricia Ofori, Lydia Ankrah, Yaa Avre, Mavis Danso, Elizabeth Biadoo and Justina Tetteh.

The rest include midfielders Florence Okoe, Adjoa Bayor, Akua Anokyewaah and Gloria Oforiwaa while Gloria Aikins, Anita Afedede Amanoky, Memuna Darko, Bernice Asante and Leticia Zekpe as the strikers. The two-leg game is a straight forward event that will see the winner gaining entrance to the tournament in November in South Africa. For the first since the Queens returned from the World Cup, the Queens will be playing their first competitive game under the newly appointed coach John Eshun.

Information gathered by the GNA Sports indicate that coach Eshun has invited US based Elizabeth Eshun to strengthen the team for his first major assignment.

Seven officials according to the source is expected to lead the team to Conakry game.

We'll discipline you for early campaign to unseat NDC MPs – ...
14 minutes ago