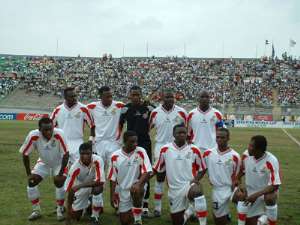 Accra, July 5, GNA - A Government delegation led by the Minister of Education, Youth and Sports on Monday evening welcomed the Black Stars on their arrival at the Kotoka International Airport after their one-all drawn game against the Cranes of Uganda in Kampala on Saturday. Mr Kwadwo Baah-Wiredu, the sector Minister accompanied by Dr Nyaho Nyaho-Tamakloe, Chairman of the Ghana Football Association (GFA) and other officials of the Ministry and the FA met the team when they touched down at 6.00 pm.

The Minister was full of praise for the achievement chalked by the team but added that there was the need for maximum support from the government, people and the team to ensure that this around Ghana qualified for the World Cup and Africa Cup of Nations.

Mr Baah-Wiredu advised the team to put in their maximum effort to ensure that they win the remaining matches towards their qualification since the competition has reached a critical stage where all the countries in the group have equal determination to qualify.

He said that, "We have to encourage and support each other in ensuring that the team chalk success in all the matches and called for the total support, prayers and goodwill from all towards that goal. Mr Baah-Wiredu gave the assurance that the government would do whatever it takes to achieve the needed results and called for the maximum support of all Ghanaians.

The Black Stars chalked an away 1-1 drawn game against the Cranes in the dying minutes of the Group Two match in Kampala through an Asamoah Djan beautiful header with five minutes to the end of the game.

Other members of the government delegation included Mr Albert Agbozo, Acting Chief Executive officer of the National Sports Council, Mr O.B. Amoah, Special Adviser at the Office of the Vice President, Mr Kpakpo Allotey, Member of the GFA and Mr Kofi Nsiah, GFA Secretary. Skipper Mohammed Hamza earlier presented the Mozambique Independence Cup that the Black Stars lifted after beating the home side by a lone goal two weeks ago.