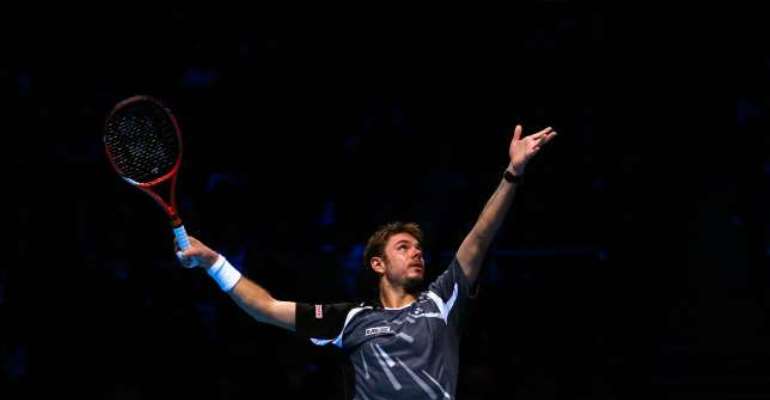 It was the 17-time major winner's 15th win over Wawrinka in 17 tour meetings, but did not come easy - the Australian Open champion blowing several chances to book a maiden appearance in the season-ending final, most notable netting a basic backhand volley on one of his match points.

But Federer said if Wawrinka served better - he landed his first serve just 38 per cent of the time - then the result would have been different.

"I clearly got lucky tonight. There's no doubt about that," Federer said.

"But you've got to keep believing that maybe there is a slight chance that you are going to be able to turn it around somehow. It happened today. I'm very pleased.

"It's been a long season for both of us. I'm happy we're able to play such a good match.

"Maybe not always the best quality, but still I was very impressed by his shot making again, his capabilities of playing forward, just keep on going.

Wawrinka agreed with Federer's assessment.
"In a tough match like that, I think there are only a few points that make the difference. I was playing great tennis," Wawrinka said.

"I'm really happy with the way I was playing. But I had some big opportunities in the third set.

"I should have taken them, especially serving for the match with two match points.

"Maybe I didn't serve well enough. But it wasn't by much that I lost this match."

Wawrinka said serving for the match in the 10th game of the third set was when he let nerves get the better of him.

"I had to make some choices. For sure that game at the end I was nervous. It was not easy to play from the baseline.

"He was normally just pushing his slice backhand return. I was like, 'OK, I'm going to try to take it, try not to wait for a mistake, try to go for it'.

"I did [go for] it two times on second serve. I did one on first serve. I missed my serve. I wanted to go backhand body because he was really going higher return. He took it the forehand. That's it.

"I think I had one easy volley backhand that I put in the net. In matches like that, you make some choice, especially when you're tired, when you're nervous.

" just wanted to go for it and not wait for a mistake or whatever, because you know that [aggression] could give you the match."