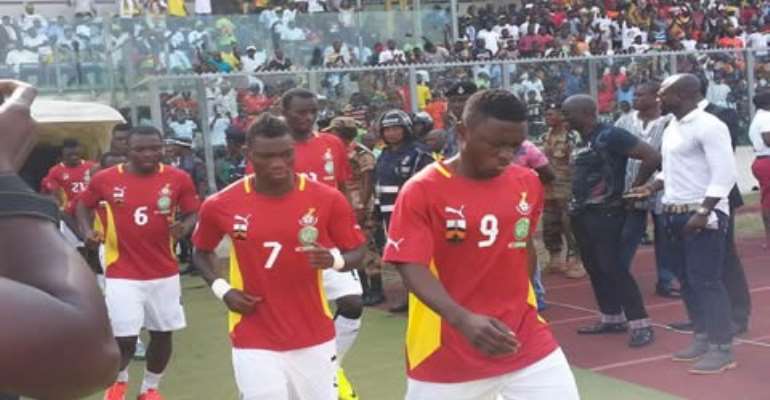 The Black Stars of Ghana have until Wednesday to determine their fate in next year's AFCON tournament after succumbing to a 1-0 loss to the Cranes of Uganda.

They have to beat the Hawks of Togo in Tamale to guarantee a place in Equatorial Guinea 2015.

The victory by Uganda has left Group E wide open with all the teams including Togo, Guinea, in contention to make the final 16.

It was their first victory against the Black Stars in 12 years and it couldn't have come at a better time.

The Cranes needed that victory badly and within 12 minutes of play they had made a statement.

A deep corner and then a powerful header left Ghana's goal Keeper Razak Braimah completely beaten with a last gasp effort by John Boye proving nothing more than a wasted effort.

It was always going to be a difficult match for the guests who were without their talismanic skipper and striker Asamoah Gyan as well as midfielder, Kwadwo Asamoah  who were all out injured and it turned out just according to what the scripts had predicted.

Uganda put lots of pressure on the Ghana defence with John Boye giving away a needless corner which was well converted by the hosts.

Down by a lone goal, the Stars lifted up their game with Christian Atsu making some rampaging runs on the right but his final delivery was always suspect.

Right from recess, the host should have increased the tally but the striker's effort was horrible.

The addition of Solomon Asante added purpose to Ghana's attack but Majeed Waris failed to connect the few chances that came his way.

Ghana still lead Group E with 8 points followed by Uganda with 7 points. Togo and Guinea are yet to play their penultimate qualifying match.

Togo have 6 points and would lead the group if it wins the game against Guinea who have 4 points.