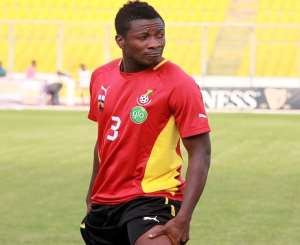 Speaking to AfricanFootball.com at the 5-star Serena Hotel in Kampala, Konadu said  Gyan could shake off the leg injury that has been troubling him to feature in the game.

“We shall wait for what the medical team will say few hours to the game (about Gyan's injury),” said the jovial coach.

Gyan who has struggling with an injury, had a slight workout yesterday at the Mandela National Stadium, Namboole, with the rest of the Black Stars squad.

Uganda are third with four points, with a better goal difference than bottom team Guinea, who also have the same number of points.

Konadu said they want to finish the job in Kampala before hosting Togo next week.

“We want to beat Uganda and qualify so that next week's game is a formality,” he told AfricanFootball.com

The coach said since most of his players are experienced because of being exposed in big leagues in Europe, he expects them to respond well against Uganda and their fans.

“I know Uganda is dangerous at home, but we are prepared for all details on the pitch,” the coach assured.