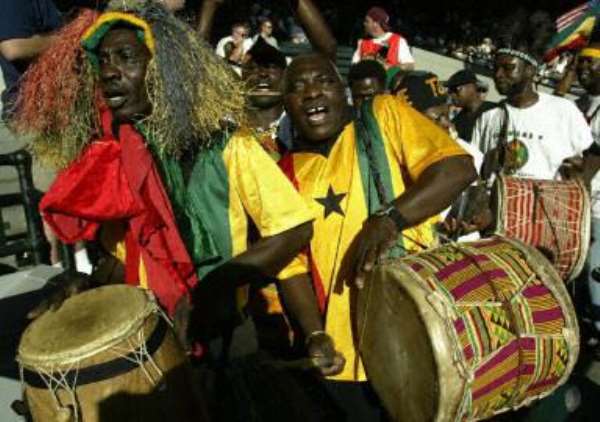 1330 GMT: Uganda v Ghana, in Kampala, Group Two Updates Ghana's Black Stars attempt to make yet another major stride in Group 2 of the Africa Cup cum World Cup qualifiers this weekend when they encounter the Cranes of Uganda in Kampala today.
At exactly 4.p.m. local time, the golden generation of the Stars will go to battle with the aim of excelling where their predecessors failed in recent years. And in case of victory, the Ghanaians will kill two birds with one stone as that will guarantee them a tight grip on their current lead.
Parading a side dominated by local players with a few Europe-based players, the Cranes have prevailed in three previous clashes with the Stars over the past four years, though they still struggle to be counted among the middleweights on the continent.
The recent dominance of the East Africans over Ghana began in 2001 when a hurriedly assembled Stars team led by Coach Fred Osam-Duodu succumbed to a 1-0 defeat to the hosts in a special Castle Cup match, courtesy a Hassan Mubiru strike.
Subsequent to that, controversial Yugoslav coach Milan Zivadinovic could also not find an anditode to the new-found form of the Cranes, leading to the Stars' 1-0 loss at the same venue in the first leg of the 2004 African Nations Cup qualifiers in 2002.
The last fruitless adventure against the Ugandans was supervised by yet another controversial expatriate coach, Burkhard Ziese, this time in Kumasi last year where the visitors forced a 1-1 draw to jeopardise the Stars' chances of qualifying to the last Nations Cup.
This is the disturbing chronology which the present Stars squad have pledged to throw into oblivion tomorrow. And who can begrudge them, after reducing bogey side, South Africa, to an ordinary side with a 3-0 victory in their last outing nearly a fortnight ago?
That significant victory not only propelled the Stars to the top of an interesting group where each team boasts of three points, but also inspired the needed confidence in the team for further accomplishments along the line. It was this refreshing mood in the Stars camp which motivated a locally-dominated team to a lone goal victory over Mozambique in an anniversary cup match of that country exactly a week ago.
The favourites status of the Stars further extends to the current FIFA world rankings where Ghana's poor 89th position still puts them ahead of Uganda who share the 97th place with Bolivia and Indonesia.Led by their inspirational coach, Mariano Barreto, the 21-man Ghanaian squad leaves Mozambique for Uganda this morning to round off preparations for the crucial tie.
Fortunately, Barreto has no injury headaches with skipper Stephen Appiah and Ibrahim Tanko gaining full fitness from their injuries.Of course, striker Mubiru and his colleagues will hope to capitalise on home support to repeat history tomorrow, but the fact is that they will be meeting a different Stars set-up too hungry for honours this time.
It is quite likely Coach Barreto will maintain his winning team against South Africa tomorrow with the possible inclusion of striker Asamoah Gyan.In the other Group Two matches, Cape Verde host DR Congo at Praia, while South Africa welcome Burkina Faso to Johanesburg, both tomorrow