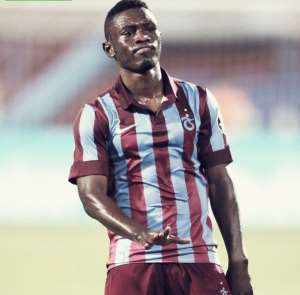 [caption id="attachment_273255" align="aligncenter" width="613"] Abdul Majeed Waris[/caption] Ghana striker Abdul Majeed Waris has attributed his lack of scoring form to being played out of position at his club Trabzonspor. The 23-year-old only scored his debut goal for his Turkish club last week in as many games.Waris' goal for Trabzonspor ended his extensive goalscoring drought for both club and country, spanning a staggering eight-month period.The former BK Hacken star will be heavily relied upon by the Black Stars in their final two 2015 AFCON qualifiers especially in the absence of leading striker and captain Asamoah Gyan.Waris believes he will do better for Ghana since he will be played in his natural central striking position unlike at his club side.“For me, I have been working really hard and I am playing like a new role [at club level] which is making it difficult for me to adapt,” he said.“I spoke to the coach [at Trabzonspor] and now things are getting better and I am adapting well.“But the national team is different. I play where I have been playing since my childhood.“I play more central which is good for me.”