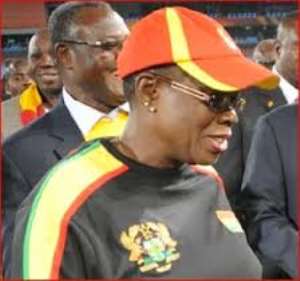 [caption id="attachment_273034" align="aligncenter" width="224"] Akua Sena Dansoah[/caption]Ex-Ghana Sports minister Akua Sena Dansua threatened Kwesi Nyantakyi to hand over the 2010 World Cup money to have his peace of mind, FA's spokesman Ibrahim Sannie Daara has revealed.According to the former BBC broadcaster, the FA was forced to hand the entire $11.7 million to the government following the country's participation at the global showpiece.“What happened with that money was that Akua Sena Dansua put a phone call through to Kwesi Nyantakyi and told him if you want your peace of mind in this country, bring all the money. It was a threat,” Darra is quoted by Starr FMThe Ghana FA is in a tango with the Presidential Commission of Inquiry looking into the country's wreaked campaign at the 2014 FIFA World Cup in Brazil. The Ghana FA are reluctant to release the $4 million dollars to government after repaying an initial $4million loan used in settling appearance fees of the team in the South American country.The Presidential Commission of Inquiry has ordered the Sports Ministry to take possession of all the proceeds accrued by the Ghana FA from FIFA for its participation in the World Cup staged in Brazil to the state's coffers pending the conclusion of its work.Many are sharply divided over whether the GFA should comply with the directive from the Presidential Commission or risk being cited for contempt.The Ghana FA meanwhile are awaiting an official request from the Sports Ministry for the transfer of the remaining funds of the just over $7m received from FIFA before making its next move.It will be recalled that a similar situation ensued four years ago where the Ghana FA was virtually bullied into surrendering it's over $11m earnings from the 2010 World Cup to the state.This was in contrast to what happened in 2006 when Ghana first qualified for the finals where over 50 percent of the earnings was handed to the GFA to undertake various football development projects.