Desailly Dismay As Ghana Pull Out 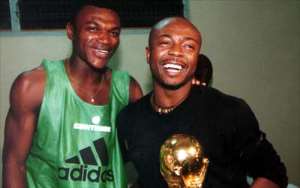 Marcel Desailly has revealed his regret at being denied an international farewell game against Ghana after the African nation pulled out of a planned friendly against France because of their busy Olympics schedule.

The veteran defender was looking forward to playing against the country where he was born, but the Ghanaian federation sent a letter to their French counterparts explaining their unavailability.

Ghana have now been replaced by Bosnia-Herzegovina, who will face 'Les Bleus' in Desailly's final match at Rennes on August 18.

"I would have liked my mum to see me play against Ghana at least once."

The friendly against Bosnia-Herzegovina will be France's only match before they open their 2006 World Cup qualifying campaign with a match against Israel on September 4.

Police Commander Thrown Out Of Yendi For Disrespecting Yaa N...
33 minutes ago