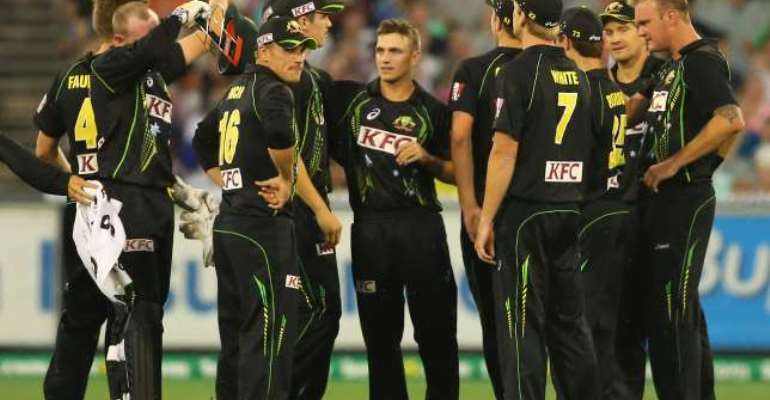 James Faulkner (three wickets), Cameron Boyce (two), Pat Cummins and Doug Bollinger (one each) combined with Glenn Maxwell and Sean Abbott to keep South Africa to just 101 in the second match of the series in Melbourne on Friday, when Australia won by seven wickets.

And the home side want to replicate that performance in the third and deciding game of the series in Sydney on Sunday.

On Friday, Australia's team bowling effort was exemplified by Boyce's first wicket, with Cummins bowling a maiden before the leg-spinner dominated Reeza Hendricks in his opening over, claiming the South African opener with a stumping from Ben Dunk.

Boyce was named man of the match in Melbourne for his 2-15 off four overs but hailed the efforts of the likes of Cummins, Faulkner and Bollinger for making his job easier.

"When the quicks are doing a good job, it helps you at the other end, so you can sort of dictate terms a little bit and I guess judge the way they're [the batsmen] are going to play," he told the ABC after Friday's win.

"Fortunate tonight, it came off and hopefully it can again in a couple of days."

The series sits at 1-1 after South Africa won the first match by seven wickets.

The tourists will be hoping to build some form of opening partnership in Sydney after watching Bollinger strike early in the first two games.

Bollinger sent Hendricks back to the pavilion with just the third ball of South Africa's innings in the first match, while Quinton de Kock lasted just two deliveries in Melbourne.

Faulkner has arguably been the player of the series so far, scoring 41 not out in the first match, before claiming 3-25 off four overs at the MCG on Friday, and if the Tasmanian all-rounder again fires on Sunday, Aaron Finch's Australia could be well on their way to victory.