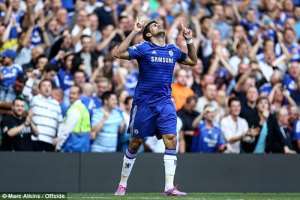 Chelsea striker Diego Costa was dropped from the Spain squad on Friday for the European Championship qualifier next week while he nurses a groin injury.

"Our doctors have been in contact with Chelsea's doctors and they have agreed it would be best for him to rest," Spain coach Vicente del Bosque said.

Spain hosts Belarus in a qualifier for Euro 2016 on Nov. 15 in the southern city of Huelva. Three days later, Spain, the two-time defending European champion, hosts world champion Germany in a friendly in Vigo.

Chelsea coach Jose Mourinho complained that Diego Costa wasn't fit because he was playing too much for Spain. The Brazilian-born striker missed four matches with a muscle injury for Chelsea after he played in Spain's last two European qualifiers in October.

"It was prudent (to drop Diego Costa) because, as we always say, the health of the players comes first," Del Bosque said. "Costa is the first one who wants to play for us."

Callejon leads Serie A with eight goals for Napoli. Nolito has impressed with Celta this season, helping it stun Barcelona 1-0 last round and climb into sixth place in La Liga. Morata has found playing time with Italian champion Juventus, and Camacho has anchored Malaga's midfield during its four-game winning streak.

"We brought (Callejon and Nolito) for their goals, their good form, and because we may have trouble opening Belarus' defense which will likely pack its area, so we needed talented players," Del Bosque said.

Spain is second in Group C with six points, level with Ukraine. Slovakia leads the group with nine. Macedonia has three, followed by Belarus and Luxembourg with one point each.

What Will The Publication Of 260-Page Cocoa Road Audit Repor...
3 minutes ago