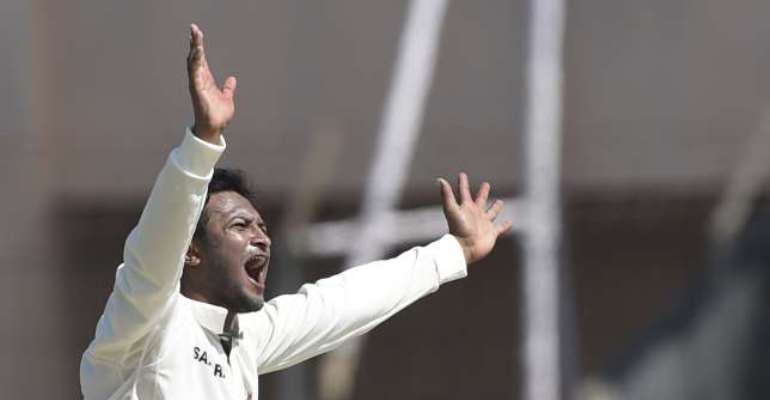 The all-rounder took 5-44 on the final day of the second Test to ensure the hosts secured a resounding 162-victory that gives them an unassailable 2-0 lead in the three-match series.

Shakib on Friday became only the third player to score a century and take five-wicket hauls in both innings of a Test as Zimbabwe crumbled to 151 all out at Sheikh Abu Naser Stadium, with only Hamilton Masakadza (61) putting up any notable resistance.

The tourists lost their last five wickets for 14 runs and will head into the final Test in Chittagong next week facing the prospect of a series whitewash.

Bangladesh went into day five on 201-5 - a lead of 266 runs - and took their time to build a lead of 313 before declaring on 248-9, with Mohammad Mahmudullah (71) making his second half-century of the match and Shuvagata Hom (50) scoring his maiden Test half-century.

Malcolm Waller recorded Test-best figures of 4-59 and Natsai M'shangwe took 4-82 on his debut.

That left Zimbabwe with 68 overs to negotiate and they made a dreadful start, slumping to 15-3 after 10 overs.

Taijul Islam (3-44) made the breakthrough when he had debutant Brian Chari (4) caught and bowled, then Shakib had fellow opener Sikandar Raza (9) caught at short-leg before dismissing captain Brendan Taylor without scoring.

Masakadza and Regis Chakabva (27) put on 70 for the fourth wicket before the wicketkeeper misread a Jubair Hossain (2-42) googly and then Craig Ervine was the spinner's second victim when he played for the turn and was stumped.

When Shakib accounted for Masakadza to reduce Zimbabwe to 137-6 the writing appeared to be on the wall and Waller (4), Elton Chigumbura and M'shangwe all departed with the score on 142 as Taylor's men folded.

Shakib was celebrating another five-wicket haul when he dismissed M'shangwe and it was left to Taijul to take the final wicket on a miserable day for Zimbabwe.