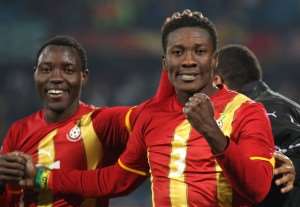 Ghanaian duo of Black Stars captain Asamoah Gyan and playmaker Kwadwo Asamoah have been named for the 2014 CAF African Football of the Year award following their excellent showing for both club and country this year, GHANAsoccernet.com can exclusively reveal.

The two key players for the Black Stars are among the twenty five players shortlisted for the top award by the Confederation of African Football (CAF) for their performances this year.

Gyan, who plays for UAE side Al Ain, was Africa's stand-out performer at the 2014 World Cup in Brazil where he shattered Africa's scoring record in the history of the tournamet by overtaking Roger Milla as Africa's highest scorer in the competition.

He also led his UAE side Al Ain to win the league title while grabbing the top scorer awards in the league in and Asian Champions League respectively.

Asamoah, the Juventus utility player is credited for the successes of of the Italian side who won the league title while steering the Black Stars to gain qualification to the World Cup where he also excelled.

But the list is dominated by players from Algeria as quartet of Islam Slimani of Sporting Lisbon, Raïs M'Bolhi of Philadelphia Union, Sofiane Feghouli of Valencia and Yacine Brahimi of Porto.

Three players from Ivory Coast were included in the shortlist with Yao Kouassi Gervais 'Gervinho' of AS Roma and his fellow country men: Wilfred Bony of Swansea and Yaya Toure of Man City were named.

Nigeria duo of duo of Ahmed Musa who plays for CSKA Moscow and Vincent Enyeama of Lille, France are the two Super Eagles who made the list of topmost 25 players while as well as Tunisian duo of Fakhreddine Ben Youssef and Ferdjani Sassi of CS Sfaxien were also shortlisted.

Other Players shorted listed for the African Player of the Year award include Senegalese:  Dame N'doye of Lokomotiv Moscow and Sadio Mané of Southampton, Emmanuel Adebayor  of Togo and Tottenham and the Cameroonian trio of Eric Maxim Choupo-Moting of Schalke 04, Stephane Mbia of Sevilla and Vincent Aboubakar of Porto.

Also listed are Algerian Yannick Bolasie of DR Congo and Crystal Palace, Thulani Serero of South Africa and Ajax, Seydou Keita of Mali and As Roma, Pierre-Emerick Aubameyang of Gabon and Borussia Dortmund and Mohamed El Neny  of Egypt and Basel completed the list.

The list was compiled through a vigorous exercise by the Confederation of African Football took into consideration the performance of the nominees for their national teams and clubs from January to November, this year.

The winners of the two categories will be decided by votes from the Head Coaches and Technical Directors of the National Associations affiliated to CAF.