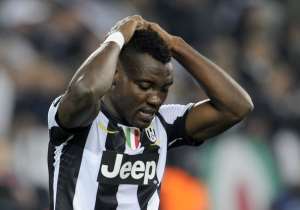 [caption id="attachment_272580" align="aligncenter" width="356"] Kwadwo Asamoah is under observation at Juventus[/caption]Juventus midfielder Kwadwo Asamoah is under observation following an injury which has ruled him out of action for two weeks.The 25-year-old has been put on the sidelines as a precautionary measure after he inflamed a knee injury during Juventus 2-0 win over Empoli last Saturday.The Italian champions have confirmed the Ghanaian international is under observation as they monitor his progress in the treatment room.“He has been asked to rest for 15 days as a precautionary measure. We're reviewing the situation and wait after the international break,” a club's statement readAsamoah is expected to return to action on November 22 for the game against Lazio.