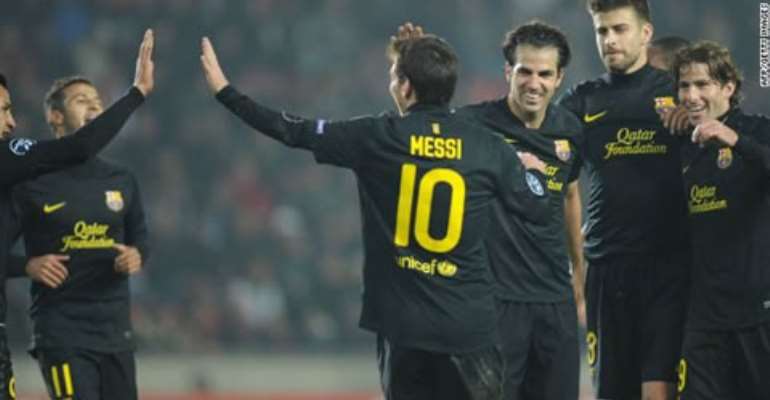 Argentina international Messi scored in the 36th minute with a soft header after Ajax failed to clear a free kick.

His 71st goal in the competition came after he linked with substitute Pedro in the 76th minute as Barcelona qualified for the last 16.

Bayern Munich, Paris St-Germain and Porto join Barca in the next round.

"Messi is without doubt the best player I've seen as a player and a coach," said Barca manager Luis Enrique.

While it took Raul 142 Champions League outings to score his 71 goals, Messi's appearance against Ajax was his 90th in the competition.

Ronaldo, who started and ended Real's 1-0 win against Liverpool on Tuesday on 70 goals, has featured in the tournament 107 times.

Ajax, who are left to battle it out with Apoel Nicosia in Group F for third spot and a place in the Europa League, finished with 10 men against Barcelona after defender Joel Veltman was sent off for two yellow cards.

The Italians, who began the match with Francesco Totti, Gervinho and Miralem Pjanic on the bench, will be fighting with CSKA Moscow and Manchester City for second spot.

"I'd like to congratulate my players. I never expected to qualify after four games," said Bayern manager Pep Guardiola.

However, Bayern's victory came at a cost as left-back David Alaba injured medial knee ligaments and Guardiola expects him to miss the rest of the calendar year.

Sporting's Portuguese rivals Porto overcame Athletic Bilbao 2-0 to seal their place in the last 16, Jackson Martinez and Yacine Brahimi with the goals.