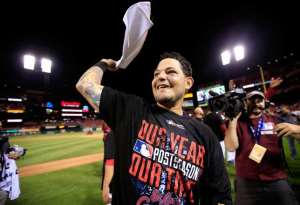 Managers and coaches vote to nominate the best-performed fielder in each position in each of the National and American Leagues, with Molina winning the Glove in the NL since 2007.

Runners-up in the World Series, the Kansas City Royals had three players back up their Glove-winning performances.

Alex Gordon has taken out the award in left field in the AL for four successive years, while catcher Salvador Perez and first baseman Eric Hosmer made it back-to-back wins.

Renowned for their defence, the Royals almost pinched the MLB championship as a play-off wildcard - and general manager Dayton Moore said they had no time for players who could not perform in the field.

"We've said from day one, if you can't play defence, there's probably not a spot for you in our everyday line-up," Moore said.