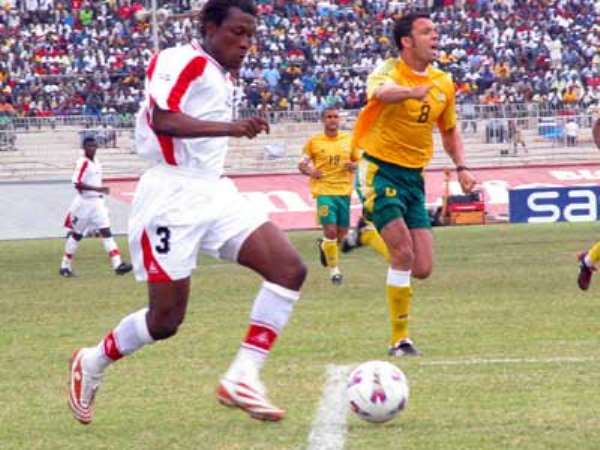 Ghana's Black Stars will attempt a defence of their leadership of World Cup qualifying Group Two when they play away to Uganda in Kampala on Saturday. The Stars beat Mozambique 1-0 in Maputo last Friday and the West African side will seek to maintain the form that fetched them a second win after demolishing South Africa 3-0 in the series.Uganda lie third in the group due to their poor goal difference, although they have the same three points as Ghana. Ghana lost their opening game 1-0 in Ouagadougou, the same margin that secured Uganda victory over Congo DR on the same day.But while Ghana defeated South Africa, the Cranes went down 1-0 in Cape Verde to keep the group open after Congo DR secured a 3-2 win over Burkina Faso. 'We'll Dismantle The Cranes Of Uganda' >Preview:Michael Quaye

When Ghana secured a 1-0 win over Mozambique in the Southern African state's Independence anniversary match last Friday, it echoed the Black Stars' declaration that “we will dismantle The Cranes”.

Indeed, the Stars' World Cup qualifier against The Cranes of Uganda in Kampala on Saturday evokes memories of the past.Parading as age-old underdogs in African football, Uganda's Cranes braved all odds and battled the Stars to a 1-1 draw in Kumasi last year.

The result and a subsequent 1-0 defeat by Rwanda in Kigali put paid to the Black Stars' march into the 2004 Nations Cup in Tunisia, denying the four-time African champions a seventh successive appearance at the continental event.

The occasion was only a playback of a familiar trend that has characterised the Black Stars' campaigns in major competitions.

And as both countries relive memories of their last meeting, the pain of Ghana's failure might be deeper in the heart and mind of Stars' skipper Stephen Appiah.

The Juventus midfielder was a prime character when the East Africans helped to strip Ghana of a Nations Cup appearance early this year.

The occasions differ, and the present goal also remains a huge target now. With Saturday's game also serving as a qualifier for the Nations Cup, Appiah's motivation to lead the Stars into the continental biennial event could not be any higher.

Gladly, Coach Barreto now possesses Lawrence Aidoo and Asamoah Gyan, two players, who, through injuries, deprived the Stars of valued striking options.Saturday's meeting in Kampala, like the other two games in the group, represents the real challenge for the leadership of the group.

Uganda have in their midst David Obua, scorer of two goals in the campaign so far.

Pitched against Apiah who has three goals, the two will fight for the goalking race aside the three points at stake.