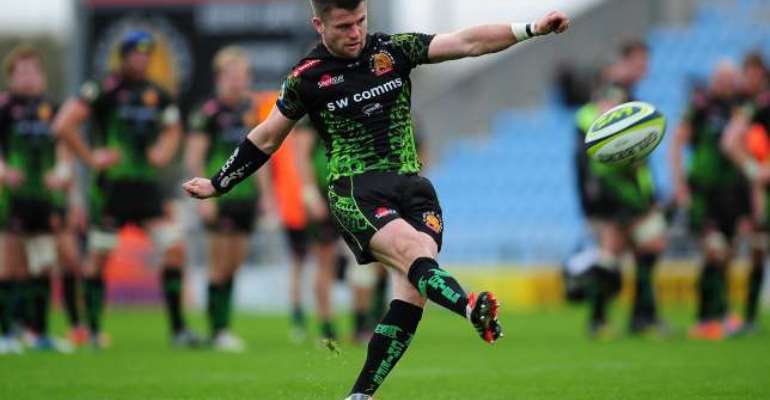 The visitors enjoyed the majority of possession in the early stages at Sandy Park on Saturday, but had to wait until the final 10 minutes of the first half for Gareth Evans to score the game's first try, after Aled Thomas and Ceri Sweeney had exchanged penalties.

Despite being down to 14 men with Brett Sturgess in the sin bin, Adam Hughes made an interception in his own half and raced away to reduce the deficit for Pool Four side Exeter, with Sweeney's extras sending the sides in level at the interval.

Sweeney found the target once again just after the break, but a try from Bill Meakes and a further five points from Thomas' boot threatened to kick off Exeter's title defence with a defeat.

Fetu'u Vainikolo touched down in the corner to pull Exeter within two points, but Sweeney failed to level matters from the tee and Pool One outfit Gloucester moved nine in front, with Yann Thomas crossing the whitewash and namesake Aled applying the conversion.

Another Sweeney penalty pulled Exeter within a converted try of their visitors and, after a series of scrums, Gloucester succumbed to a penalty try in the closing minutes.

Sweeney scored the conversion to put Exeter one in front, before opposite number Aled Thomas squandered one last opportunity to snatch victory - agonisingly striking the bar from distance.

Will Rowlands and Will Helu (two) both touched down as Wasps went in at the break with a 19-17 advantage, with Alberto de Marchi and Josh Beaumont scoring the tries for Sale.

The hosts responded well after the interval with scores from Viliami Fihaki and Charlie Ingall, but Ed Jackson's try and the Alex Lozowski conversion that accompanied it set up a thrilling finish.

Lozowski scored another three points with the boot to level matters, before Macleod's 77th-minute winner.

Close encounters proved to be a running theme on Saturday, with Leicester Tigers holding off a second-half fightback to win 17-16 at London Irish, but London Welsh were true to form in a 47-7 defeat at the hands of Bath.

Premiership leaders Northampton Saints triumphed 37-23 against Newcastle Falcons, while - in Sunday's only fixture - Saracens were 25-20 winners over Harlequins.