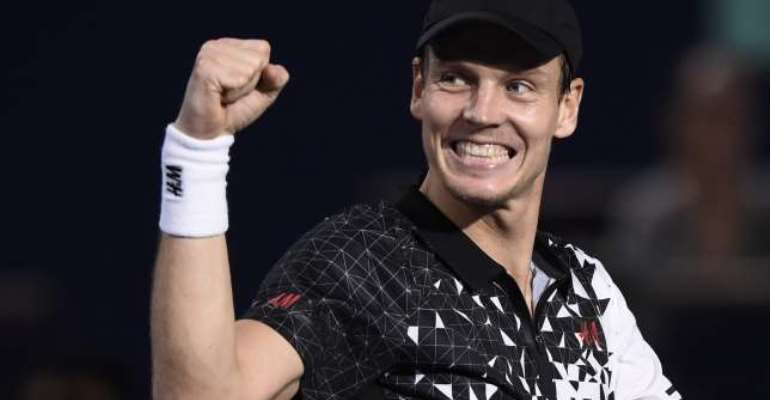 Berdych recovered from losing the first set to defeat his South African opponent 6-7 (4-7) 6-4 6-4 in the quarter-finals of the ATP Paris Masters.

The Czech broke Anderson to begin the second set, held serve himself and then maintained that gap for the rest of the set, while Berdych recovered from being 3-1 down in the third to break straight back and win five of the last six games to clinch victory.

Berdych was thrilled to have again qualified for the ATP's end-of-year tournament in London.

"No matter how many times you [qualify], it's probably never going to be a routine thing," he said.

"It's always just proof of having a great season, and especially in this era of tennis...you kind of fight for only four spots, I would say.

"So it's not easy. What I really like, especially this year, is that I qualified myself.

"I didn't have to wait for anybody to lose or win or anything like that. That's definitely the best feeling."

Milos Raonic and Kei Nishikori joined Berdych in securing the final spots at the ATP finale after the Japanese recovered from losing his opening set against David Ferrer to triumph 3-6 7-6 (7-5) 6-4.

Both Raonic and Nishikori had to reach a round more than Ferrer in Paris to eliminate the Spaniard from contention for the World Tour Finals.

After Ferrer took the first set in 47 minutes, the world number nine broke Nishikori in the first game of the second.

Nishikori broke straight back, however, and in a topsy-turvy set, eventually forced a tie-breaker, where he came from 4-0 and 5-2 down to win the last five points and level the match.

In a brilliantly stubborn performance from the 24-year-old, Nishikori outgunned his more experienced opponent in the third set, breaking Ferrer in the ninth game, before holding serve to become the first Asian player to qualify for the World Tour Finals.

Earlier, Raonic stunned Roger Federer 7-6 (7-5) 7-5 to hurt the world number two's chances of overhauling top-ranked Novak Djokovic by the end of the year.

It was Raonic's first win in seven attempts against the Swiss veteran, who could face as much as a 1,310-point gap to Djokovic at the World Tour Finals, if the world number one lifts the trophy in Paris.

The win continued Djokovic's perfect record against Murray this year - five wins from as many matches - while he has won eight of his last nine meetings with the Briton.

We Don’t Need IMF To Declare HIPC Symptoms Of Ghana’s Debt —...
49 minutes ago

Ashanti Region: Over 500 NDC Members Defect To NPP At Effidu...
54 minutes ago