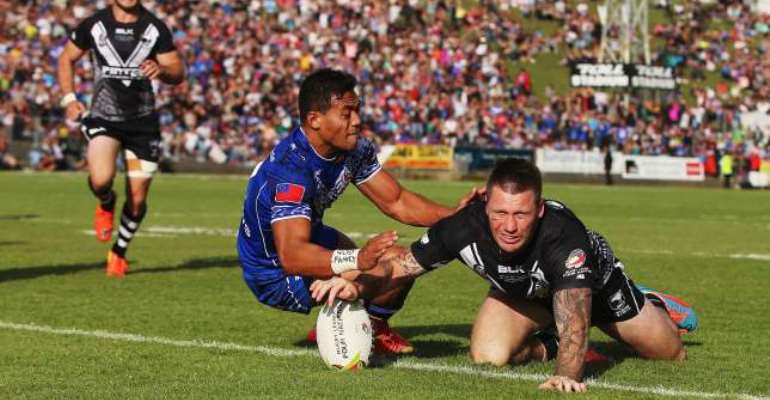 The Kiwis trailed by two points at the break and fell further behind in the 44th minute when Joey Leilua produced a fearsome fend on Kenny-Dowall to score a powerful try.

Jason Nightingale answered for the Kiwis in the 63rd minute to close within two points in front of 16,912 fans at Toll Stadium.

The pivotal moment arrived in the 74th minute when Samoa five-eighth Ben Roberts intercepted a Shaun Johnson pass but then inexplicably threw a flick pass on the first tackle.

Referee Henry Perenara spotted a knock on and the hosts marched down the field and scored the match winner through Kenny-Dowall with four minutes on the clock.

Samoa kept fighting to the end, Leilua making a break in the final minute but when his pass was ruled forward the contest was over.

The win ensures the Kiwis will feature in the Four Nations final in a fortnight, while Samoa's second narrow loss has ruled them out of the decider.

Samoa winger Tautau Moga opened the scoring with an 80m intercept try in the sixth minute to open up a surprise 4-0 lead.

Kieran Foran answered in the 10th minute when he reached out and planted the ball right on the tryline after returning hooker Issac Luke drew two defenders out of dummy half.

Shaun Johnson added the extras to make it 6-4 to the Kiwis in the 12th minute but it wasn't going to be easy for the Kiwis.

Samoa hit back with a try to Daniel Vidot off a clever grubber from Ben Roberts to reclaim an 8-6 lead six minutes later.

Kiwi prop Jesse Bromwich looked to have planted the ball on the tryline on the half-hour but referee Perenara did not check it and the Storm prop did not argue in a bizarre sequence.

Toll Stadium was no place for the faint hearted, with Samoa skipper heading off for a concussion test before Leilua rearranged Foran's ribs after a hospital pass from Simon Mannering in a fearsome tackle on the half hour.

The Kiwis were again denied by video referee Ian Smith in the 33rd minute when the man upstairs ruled Dean Whare obstructed Dominique Peyroux in the lead up to what looked a legal Manu Vatuvei try.

New Zealand's frustrations only increased when Leilua crossed early in the second half but Stephen Kearney's men stuck to the task with two tries in the final 17 minutes to back up last week's upset over Australia with a hard-fought victory.