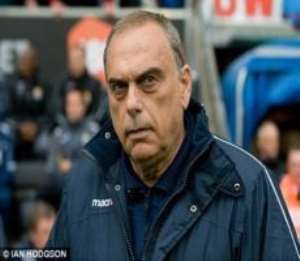 Avram Grant might not get the Ghana job over a political concern linked to his nationality as an Israeli, according to the local media.

The 59-year-old is widely regarded as the front-runner for the vacant Black Stars job following his impressive display before the Ghana FA's interview panel almost a fortnight ago.

But Grant could be disqualified from the race over fears he might not be able to travel to certain countries who hold traveling sanctions against Israel.

The ex-Chelsea boss carries an Israeli passport which according to reports is not tolerated by some countries – especially in the Arab world.

The traveling sanction on Israel has to do with the undying war against Palestine.

Some countries have decided to bar Israelites from traveling into their territories in solidarity with Palestine.

This, according to reports gathered by Asempa FM, this could  rule Grant out since the Black Stars might be playing in such countries and cannot afford to be without their coach in the event the former Chelsea boss gets the job.

According to the radio station, the GFA is doing background checks on the 59-year-old to see if he is in the clear from this far stretching sanction before he is appointed as the substantive replacement for Kwesi Appiah.

The Ghana FA interviewed three out of the five shortlisted applicants for the job almost a fortnight ago and are believed to be close to naming their choice after deliberations at the Executive Committee level. Story by Ghana/Joy Sports