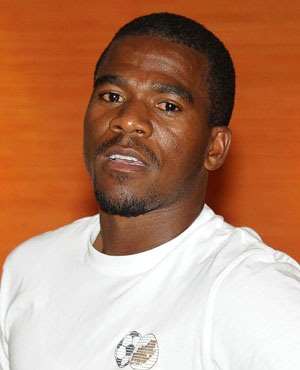 [caption id="attachment_271888" align="aligncenter" width="300"] 'Prophet' offers R20 000 for info on Meyiwa killing[/caption] Motsoeneng is offering a R20 000 reward for information that could lead to the arrest of those behind the killing of Bafana Bafana captain Senzo Meyiwa, his church said on Wednesday. "Prophet Paseka Motsoeneng joins the millions of South Africans in condemning the senseless killing of Bafana and Orlando Pirates captain, Senzo Meyiwa," spokesperson Sixolise Gcilishe said in a statement."The prophet... calls on fellow worshippers and members of the community at large to support the police efforts in locating and apprehending the culprits."Meyiwa, captain and goalkeeper of the national team and Orlando Pirates, was shot dead in Vosloorus, Ekurhuleni, while visiting his girlfriend, singer and actress Kelly Khumalo, on Sunday night.The attackers apparently demanded cellphones and money. On Tuesday, police released identity kits of two dreadlocked men with gold teeth believed to be involved in the shooting.A reward of up to R250 000 has been offered for information leading to the arrest and conviction of the killers. Two people were questioned in connection with the murder but were released without charge.Gcilishe said the tragic death of Meyiwa should rally all to pray and use all the might at their disposal to fight crime.People had to assist members of the SA Police Service to reclaim their neighbourhoods, and do all they could in providing information that would lead to rooting out crime, she added."Therefore, in memory of the fallen giant, prophet Mboro will assist the efforts of the police and contribute R20 000 to the amount that the SAPS has offered as a reward for credible information that will lead to apprehension and successful convictions of the killers," she said.Gcilishe said Mboro would contact the provincial SAPS leadership and work out the necessary logistics."We also wish to send condolences to all the families of Senzo Meyiwa, including Bafana Bafana, Orlando Pirates and SA Football Association," said Gcilishe.A memorial service organised by the KwaZulu-Natal provincial government will be held at the Durban City Hall on Friday ahead of his funeral on Saturday.Meyiwa will be buried in his hometown of Umlazi, south-west of Durban.Memorial serviceAnother memorial service will be held at the Standard Bank Arena in Johannesburg on Thursday for Meyiwa and two other sporting icons, 800m athlete Mbulaeni Mulaudzi and professional welterweight boxer Phindile Mwelase, who died during the past week.The memorial will be hosted by the Gauteng provincial government in partnership with the sporting fraternity.Sport Minister Fikile Mbalula, Gauteng Premier David Makhura, Sport MEC Molebatsi Bopape and senior members of the sporting fraternity were among some of the people expected to be present.Athletics SA president Aleck Skhosana said: "The hosting of a joint memorial service demonstrates the power of how sports can bring together a nation. As a nation we have celebrated the victories of these three national sports athletes together and now we stand together to bid them farewell."Bopape has encouraged fans to attend the service to bid a final farewell to the three who had given their lives to entertain and bring joy to South Africans."It has been an emotionally draining week for us all to have lost our heroes in such a short space of time. Let us all ensure we give them a sending off fitting of the royalty that Meyiwa, Mulaudzi and Mwelase were worthy of," said Bopape.Another memorial would be held for Mulaudzi in Midoroni, Makhado municipality in Limpopo, on Friday at noon.- SAPA