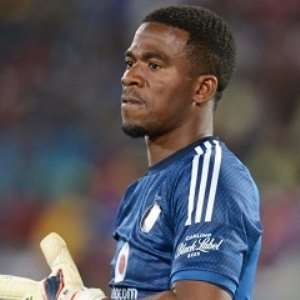 [caption id="attachment_271647" align="aligncenter" width="240"] Bafana Bafana captain Senzo Meyiwa was murdured on Sunday night[/caption] South Africa police took in two men for questioning on Tuesday for the murder of Orlando Pirates and Bafana Bafana captain Senzo Meyiwa. The Star newspaper was reliably informed by independent police sources that Tuesday's publication of identikits of the possible suspects had led them to the two men.Police have offered a $25,000 reward for information leading to the arrest and conviction of the killers.The Star understands that the first man, believed to be in dreadlocks and almost identical to the one in the identikit was found hiding in Soweto.He was taken in for questioning at Jabulani police station in the afternoon.The task team investigating Meyiwa's murder at his singer girlfriend Kelly Khumalo's home in Vosloorus later drove the man to Ekurhuleni for the purpose of further investigation.“We don't know their intention as to whether they will link him to the murder or not,” said a source.At about 6pm, another source confirmed that the second man was being held for questioning in Ekurhuleni in connection with the murder.Gauteng police spokesman Brigadier Neville Malila said the identikits were compiled after police had interviewed witnesses.He, however, denied that the police had questioned anyone when called in the evening.However, one of the sources said: “One of the guys (the man with dreadlocks) was found in Soweto and the other (in a hoodie) was located on the East Rand.”Another source told The Star that a cellphone stolen during the shooting was recovered at the Mzamane informal settlement, which is not far from the murder scene, and had been placed in one of the crime kits as part of the police's investigations.But Malila was adamant that no such piece of evidence was confirmed to him by the investigation team.News of people being questioned came as Meyiwa's family announced that they had hired their own team of private investigators to help them find the people who killed their son.The team, comprising 10 Durban-based private investigators, would conduct their investigation together with the police task team set up by national police commissioner General Riah Phiyega this week, the family said.Meyiwa was shot and killed in Vosloorus on Sunday while visiting Khumalo, the mother of one of his daughters.There was little activity outside the Khumalo home apart from some journalists and police officers.None of the Vosloorus residents shown the identikits by The Star team on Tuesday – both in the township and nearby informal settlements – could confirm knowing the men.“Is that other one a woman? Yes, this one looks like a woman,” one man said.Another man at the Mzamane informal settlement shouted “Are these the satans who robbed us of the Chiefs and Pirates game?”, referring to the Soweto Derby that was to be played this weekend.The game was cancelled due to Meyiwa's death.Others just shook their heads to indicate they didn't recognise the two men.But others said, “yah, I think I've seen these faces before, but I just can't say where or when”.One woman said: “They look familiar… I'll ask my son when he comes home; he may know them.”Meyiwa will be buried in uMlazi outside Durban on Saturday.