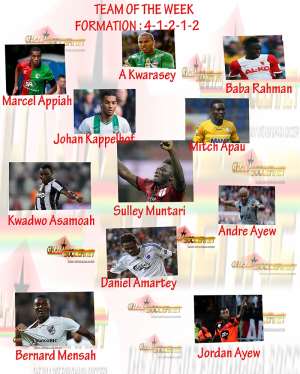 AC Milan star Michael Essien and Feyenoord attacker Elvis Manu have both lost their places in the GSN-GTV SPORTS PLUS Team of the Week due to inactivity and loss of form during the weekend.

But there are places for youngster Bernard Mensah and Daniel Amartey who both impressed during the weekend. Below is the team of the week.

Adam Kwarasey – Stromsgodset
Kwarasey is picked for the role basically due to the lack of options. The Norwegian-born was in no form that is commendable as his howlers led to Stromsgodset losing 3-2 in the Norwegian top-flight. Razak Brimah who could have replaced him picked a red card while in action for Mirandes in the Spanish second-tier.

Marcel Appiah – NEC Nijmegen
The German-born Ghanaian defender was influential for NEC Nijmegen who maintained their leadership of the  Eerste Divisie, helping them to beat Oss 3-1.

Baba Rahman – Augsburg
Normally there should no questions for Baba's inclusion. Phenomenal! He played full throttle and impressively did so as Augsburg defeated Freiburg 2-0.

Johan Kappelhof – FC Groningen
Fearless and powerful in defence for Groningen as they drew 2-2 against AZ Alkmaar. Kappelhof has a Ghanaian father and is ready to consider international call from Ghana.

Mitch Apau –  Westerlo
Another Dutch-born defender who is making waves in the Belgian top-flight. On Saturday, he was in full time action for Westerlo and helped them beat Kortrijk 2-1.

Sulley Muntari – AC Milan
Muntari holds down his place in the squad following his good show for Milan in the 1-1 draw against Fiorentina on Sunday night. He lasted the entire minutes.

Kwadwo Asamoah –  Juventus
Asamoah beat Patrice Evra to a starting role for the second time on a role as Juventus defeated Palermo 2-0. He played full throttle.

Andre Ayew – Olympique Marseille
Though Marseille slipped to a 1-0 loss at Lyon, Andre distinguished himself in the game and his quality clearly showed in the game.

Daniel Amartey – FC Copenhagen
The 21-year-old makes the team for the first time following his fine form for FC Copenhagen who beat Hobro 2-0 on Sunday. Amartey transferred his form from the Europa League to the Danish Super League and helped them win.

Bernard Mensah - Vitória Guimarães
The 19-year-old is in the team for his dazzling for Vitória Guimarães in the Portuguese top-flight as they beat Vitória Setúbal 1-0 at the own backyard. Fine form.

Jordan Ayew – Lorient
Jordan won and converted a penalty that was Lorient's consolation goal in their 2-1 away loss at Caen.