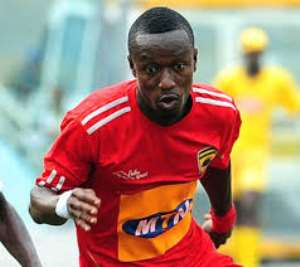 Kotoko captain Michael Akuffo has hailed the quality of the club's new signings ahead of the start of the new season.

The Porcupine Warriors have fortified their squad with the acquisition of several experienced hands with the aim of retaining their Premier League crown and making a meaningful impact in the CAF Champions League next season.

Akuffo is delighted with the purchase of the new additions and feels they will contribute immensely to the club's success.

“We have a good squad and I believe we'll be difficult to beat this season,” he said

“Look at the depth in quality and you can only hope that we can get better this season as well.

“We want to win the League for the fourth consecutive time and I'm excited at the prospect of achieving the target.

“I believe the new players will help us get to the border line and I'm excited about it.”

Kotoko will play a friendly game against New Edubiase on Wednesday in honour of the chief of Bekwai Nana Kakari Apau.

If Nana Addo has brought Free SHS, what else can't he do for...
49 minutes ago