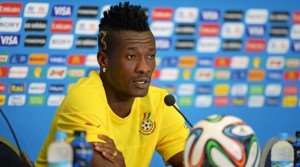 Ghana will have key striker Asamoah Gyan fit for next month's Africa Cup of Nations qualifiers against Uganda and Togo despite reports in certain quarters that he will miss the two matches.

The UAE-based attacker has returned to training with his club Al Ain after suffering a thigh injury during a league match in the top-flight last week.

While Ghana's leading football news website www.ghanasoccernet.com revealed that he will be out of action for about one week, subsequent reports from some media outlets claimed that he has been ruled out for NINE WEEKS!

If that report was true, it meant that Gyan, who is Ghana's deadliest weapon, will miss the two matches and will return just for the start of the 2015 Africa Cup of Nations in January.

However, confirming Ghanasoccernet.com's report, the Ghana striker returned to light training with his club on Saturday which means he is getting close to full fitness.

This also means he will be available for Ghana in next month's clashes against Uganda and Togo.

The 28-year-old is struggling with a thigh strain which according to doctors of the UAE club should keep him out for seven days.

The Black Stars captain even flew in renowned Serbian therapist Mariana Kovacevic to accelerate his recovery.

Gyan appears to be responding well to the treatment as he started a personalized training on Saturday evening.

The influential striker trained away from the rest of the team in Saturday evening's session at the Khalifa bin Zayed Stadium.

He could return to action on Monday when they play Al Ahli in a key match in the UAE top-flight.

Gyan's return to training serves as a massive boost especially with reports flying around he could be out for nine weeks – a situation which would have ruled him out of Ghana's 2015 AFCON qualifiers against Uganda and Togo in November.