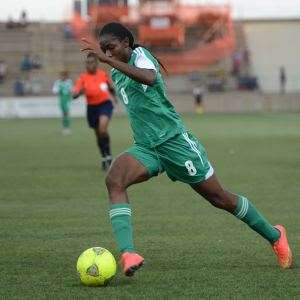 Nigeria clinched a record seventh title at the Africa Women's Championship after defeating Cameroon 2-0 in the final on Saturday evening at the Sam Nujoma stadium in Windhoek, Namibia.

Desire Oparanozie curled a well taken free kick in the 13th minute past Cameroonian goalkeeper Annette Ngo Ndom to give the Super Falcons an early lead.

Cameroon's Gaelle Enganamouit's had a chance at goal but the long range shot went wide to deny Les Lionesses an equalizer minutes later.

Les Lionesses' defender Yvonne Leuko slid at the age of the penalty box losing the ball as an alert Francisca Ordega picked it up sending a through pass to youngster Asisat Oshoala who spectacularly found the back of the net in the 44th minute to give Nigeria a 2-0 lead before the halftime mark.

Enganamouit had yet another chance at goal in the 63rd minute from a corner kick but it went wide again before she almost converted a well taken free kick but was denied by the crossbar in the 79th minute.

Nigeria held on to be crowned continental champions and remain unbeaten at the two-week long tournament that attracted eight countries.

The Super Falcons have never lost to Cameroon since the inception of the continental showpiece in 1991 as both sides faced off in the final back then with Nigeria winning 2-0 against Les Lionesses.

Nigeria, Cameroon and Ivory Coast will represent Africa at the 2015 Fifa Women's World Cup in Canada.