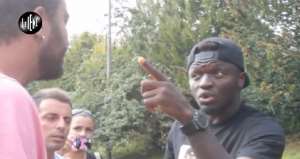 Ghana star Sulley Muntari attacked and smashed the tablet of an Italian prankster because the television presenter depicted the devout Muslim as a homosexual who was having sex through his backside, it has now emerged.

The photomontage of the video of Muntari having a homosexual ( click here to watch ) relationship – which is seen by Muslims as one of the biggest sins, was shown to the AC Milan player which sparked his anger.

The video footage which is available of Ghana's leading football news website, www.ghanasoccernet.com, shows the Ghana star bending over before an object commonly called 'Bentua' in Ghana is put in his anus, painting the pictures that he was having sex through his backside.

When shown the video by the Italian TV presenter who is a prankster, the AC Milan player was sparked into a threatening verbal tirade last week.

The famous Italian television presenter, Stefano Corti, whose television show, Reservoir Dogs is known for pranks and jokes, approached the Ghanaian with his jokes and pranks on his tablet.

But Muntari did not take kindly to what was shown him on the device as he snatched the tablet and smashed it to the floor in a furious rage while the whole incident was being filmed.

The television show which jokes about everything in the Italian society had the presenter showing Muntari fake edited video showing the Ghanaian almost naked in what looked like in a homosexual relationship.

Immediately he was shown the video on the tablet, the Ghana star reached out of the device before smashing the tablet to the floor, damaging it in the process.

He fired a warning to the television presenter Corti that he will physically attack him in future if he repeats the prank.

“You're sick, I do not joke about these things. The next time you make a thing like this I'll break your face,” Muntari warned the television presenter after smashing his tablet.

While the AC Milan players Maxi Lopez and De Rossi in the video laughed over it knowing that it was meant for the funny Reservoir Dogs show, Muntari did not take lightly to the fact that he was being depicted as a homosexual owing to his strong Islamic beliefs.

Do you think the presenter got what deserves? Make your views known in the box below:

Odododiodoo: ‘Impotent’ Police Cause Of Constant Clashes – ...
13 minutes ago