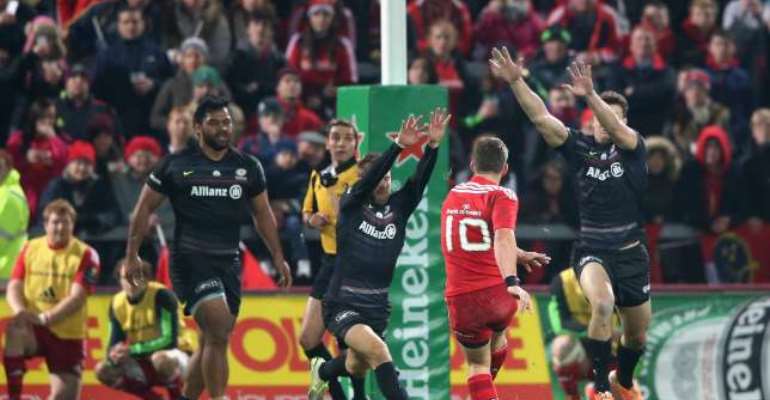 On a soggy night at Thomond Park, the hosts and last season's beaten finalists played out a tightly contest first half that ended with a miserly 3-3 scoreline.

David Kilcoyne went over for the game's only try just 19 seconds after his 60th-minute introduction, while Saracens were down to 14 men due to Gill's tip tackle on CJ Stander.

Saracens had racked up more than 30 points in five of their last seven games but it soon became clear they would not continue their free-scoring ways as an attritional contest unfolded before the fervent Munster faithful.

Ian Keatley landed a penalty to put the hosts ahead in the 27th minute before Owen Farrell levelled.

Saracens enjoyed their best period of the match, pinning Munster back after the restart and they denied a seemingly inevitable try when a five-metre scrum was turned over.

Gill's indiscipline put paid to the Premiership team's momentum and Keatley's second penalty from an eventual six attempts from the kicking tee edged Munster ahead.

The decisive moment arrived as Kilcoyne touched down off the back of a driving maul.

Keatley failed to add the extras but a drop goal from the fly-half ensured the two-time European champions could breath easily.

Munster lead Pool One ahead of their December meetings with Clermont Auvergne.