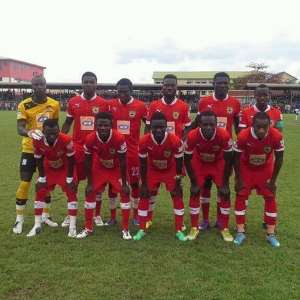 Asante Kotoko have confirmed their planned friendly with an unnamed Spanish club this year has fallen through.

The Ghanaian champions in a release earlier this year revealed they were in talks with an unnamed Spanish top flight club to play a sensational friendly in Kumasi.

Reports later emerged that the unnamed Spanish club was Seville even though the club declined to confirm the identity of the mystery club.

The club's spokesman Ali Maradona has now confirmed that the initial plan to stage the friendly this year has been shelved.

He however revealed that a new plan to play the friendly next year to coincide with Kotoko's 80 th anniversary is being hatched.

“We were arranging a friendly based on the initially set date for the commencement of the Ghana Premier League,” Ali Maradona told Metro FM.

“But we all know what has happened with the postponement of the league and how it doesn't fit in the program of the Spanish club.

“Therefore we look to do the arrangement again to coincide with Kotoko's 80 th anniversary which is next year.”

Kotoko have won the Ghana Premier League for the past three seasons and are determined to make a more meaningful impact on their return to the CAF Champions League.