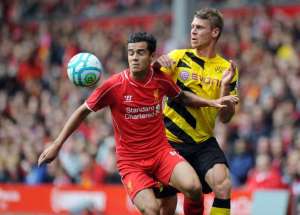 Despite currently sitting fifth in the fledgling Premier League standings, Brendan Rodgers' side have made a shaky start to 2014-15, with the fluid football of last term so far absent.

A host of new players arrived at Anfield in the wake of Luis Suarez's departure to Barcelona in the close-season, including misfiring forward Mario Balotelli, but playmaker Coutinho has put the onus on himself to create more goal-scoring opportunities.

"We haven't had a good start to the current season. We all acknowledge the team are not currently in our best form," he told the club's official website.

"Each striker has their own style and training sessions help me understand how they prefer the ball to reach them. In my position, it's important that I create clear opportunities for them.

"I have to adapt my style to all strikers - as does any player who is in charge of playing in the No.10 role. We have to create open chances regardless of who the strikers are."

After making a flying start to his Liverpool career upon his arrival from Inter in January 2013, Coutinho struggled to have the same impact last term.

But the diminutive midfielder has improved this season, notching a crucial goal in last weekend's scrappy victory over QPR before providing a bright spark during the midweek UEFA Champions League defeat to Real Madrid.

However, the 22-year-old, who has retained his place in Brazil's squad for their November internationals, says that his own performances are irrelevant unless the team win.

"Football is a team game and everyone has their own responsibilities. My role encompasses creating goal-scoring opportunities and scoring goals myself," he continued.

"It's difficult to say anything on a personal level when you lose the game, no individual performance really matters when the team don't win.

"The most important thing for me is that the team deliver and win games. We want to be performing well again soon and we must keep working hard to achieve that."