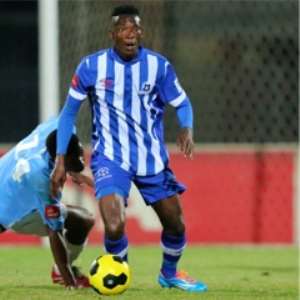 Maritzburg United's Ghanaian midfielder John Paintsil says that he is more than happy with how his career at the club is progressing.

Paintsil joined the Team of Choice prior to the start of the season, having turned out for National First Division outfit Santos for the 2012/13 campaign.

The 33-year-old has played a key role in Martizburg's rise to third in the Premiership standings, and he says he has fitted in well at the KwaZulu-Natal club.

“I must admit that is been great for me since I joined this team, I was initially worried because there was so much on my mind after the few months with Santos and even for the national team,” Paintsil told Football411′s Ghanaian correspondent Russel Wiafe.

“I wanted to join a big club to make a statement for myself, and now I think that gradually I am getting to my old form back.

“This team is a good team, the coaches and the players give their all and no wonder we have started well in the PSL, we want to make sure we qualify for the CAF Champions League and make a case for ourselves in the league.

“We know is not going to be easy because there are equally good teams that want to get to where we are.”

Steve Komphela's side recorded a comprehensive 4-1 victory over SuperSport United on Wednesday, a result which Paintsil feels will send a message to other teams.

“The win against SuperSport United was a clear statement that we want to achieve something this season and the seasons ahead,” he said.

“The fans and the people here are amazing and we will keep on doing our best in the league.”