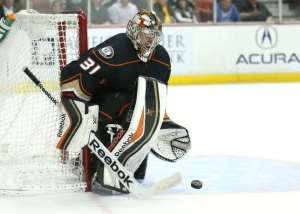 Anaheim goaltender Andersen made 22 saves, while winger Perry netted his second hat-trick of the season as the in-form Ducks trumped the Buffalo Sabres 4-1 on Wednesday.

Buffalo are still looking to add to their solitary victory, with only the winless Carolina Hurricanes holding a worse record.

The Ducks doubled their lead less than 10 minutes into the second, with Ryan Kesler sending the puck into the right side of the net.

Andersen was finally breached with five minutes remaining in the contest, ending his hopes of a second successive shutout, as Tyler Ennis converted a rebound.

Perry completed the scoring with two goals in the final three minutes.

Nikita Nikitin's second-period goal proved to be the match-winner as the lowly Oilers stunned the Washington Capitals 3-2.

Defenseman Nikitin - in his first season with the Oilers - found the back of the net via a power play with four minutes remaining in the second period to fire Edmonton to an unlikely win.

Justin Schultz and Ryan Nugent-Hopkins also scored for the Oilers, who notched back-to-back wins but remain bottom in the Western Conference's Pacific division.

Edmonton goaltender Ben Scrivens - deputising for the injured Viktor Fasth - saved 34 shots, with 13 of those coming in the third stanza.

John Carlson and Mike Green were on the board for the Capitals, who are second in the Eastern Conference's Metropolitan division.

In Wednesday's other game, three third-period goals lifted the Philadelphia Flyers to a 5-3 win over the Boston Bruins.

Meanwhile, the Ottawa Senators' home clash with the Toronto Maple Leafs was postponed following a fatal shooting in Canada.

A Canadian soldier was killed after a series of shootings at the National War Memorial and on Parliament Hill in downtown Ottawa.