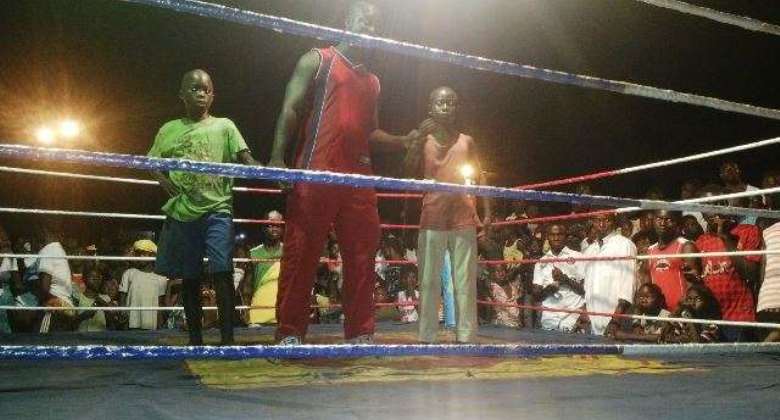 Ghana's history making fight talent hunt powered by Goldstar Airlines and partnered by your authoritative Allsports.com.gh belled off at Korle Gonno on its 4th leg Sunday night and once again it was a huge success despite the disruptions of a rainy night in Accra.

Ghanaian boxing bigwigs including renowned WBC judge/referee, Ataa Eddie Pappoe, American promoter and Goldstar Airlines partner, George Johnson and Mike Neequaye were among the dignitaries who defied the distractions of the rain to show up and inspire many young aspiring boxers, very talented between the ages of 12 and 16 to showcase their huge talents.

In the end, not less than twenty (20) youngsters keen on churning out a career in the fistic sport were identified and selected as potential world beaters on the roadmap which technical expertise is led by Will Power Gym boss, Napoleon Tagoe, himsellf a former boxing champion.

"I must confess that even myself I've been surprised by the talents of the young boxers we have seen since the beginning of this project at James town Roundabout about one month ago," admitted the former Africa and North America champion.

"We are certainly committed to helping thee young boxers become professionals to make Ghana proud. If they are willing to listen to instructions and advice, we will teach them the basics to becoming world champions. I know a lot of them can," Napoleon Tagoe told AllSports.com.gh .

The nationwide talent hunt has received the backing of the sport's biggest names in this country including Peter Zwennes, the President of Ghana Boxing Authority (GBA) and his executives board as well as boxing legend, Aziumah 'Zoom Zoom' Nelson who have have both taken time to show up at the Chorkor and Gbese legs respectively.

The talent hunt train has been earmarked to travel across all corners of Ghana looking for the country's next potential boxing stars, all powered by incoming indigenous airline, Goldstar Airlines who have shown social corporate responsibility by fashioning out this programme that presents unprecedented opportunity for talented boxers to realise thoer dreams more than ever before.

"We remain committed to the development of Ghana in all ways. The airline is for Ghanaians so the people of this nation will benefit most and that's just what we are showing with this juvenile boxing talent hunt. There is a lot more we have to offer this country when we begin work," said Eric Bannerman, CEO of Goldstar Airlines who represented full time on the rain at Korle Gonno. Follow @thedonplato