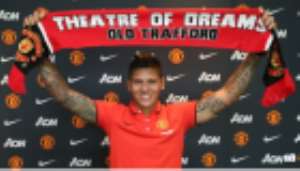 The worst nightmare of a footballer.
To be down by three goals to nil against a team including Lionel Messi and Neymar with just a little over ten minutes to play is a punishment enough.

Derek Boateng had it worse against Barcelona as he featured for his Eibar side in the Spanish La Liga.

The English Language might lack the requisite words to fully unravel Derek Boateng's experience. Just enjoy the video below and make your own understanding.