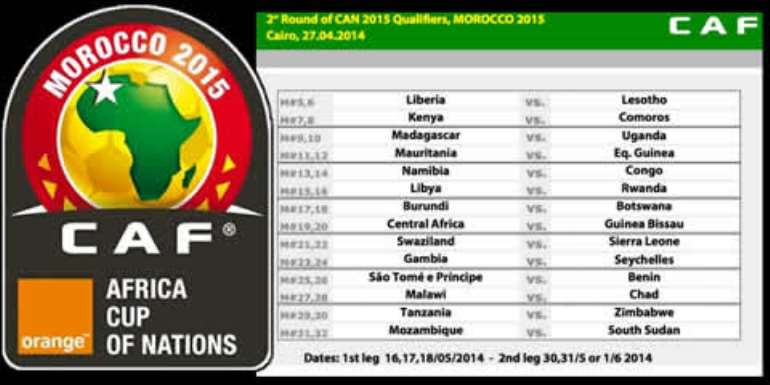 Pressure group, OccupyGhana, has joined calls for government to shelve plans to host the African Cup of Nations (AFCON) sports tournament slated for next year.

According to the group, Ghana's poor health care system, mismanagement of resources, the country's economic challenges, among other factors, makes the idea of hosting the competition a dreadful one.

Sports Minister, Mahama Ayariga, hinted that Ghana is likely to stage the competition after original host Morocco backed out from staging the tournament over fears the deadly Ebola scourge could put the north African country at risk.

Morocco officially wrote to the Confederation of African Football (CAF) that it is no longer interested in hosting the competition because of the ravaging cases of Ebola and the World Health Organisation's heightened risk alerts of the disease spreading through social gatherings such as the tournament.

"For the same reason, South Africa, the other country aside Ghana CAF approached as alternative hosts, has issued a strongly worded letter  that it cannot welcome Ebola from potential participating nations Guinea, Liberia and Sierra Leone the OccupyGhana movement stated in a release Sunday.

OccupyGhana explains that Ghana's "shameful inability to cope with even treatable cholera, which has affected thousands and killed several hundreds of Ghanaians" should be enough reason to put aside plans to host the AFCON in January and February 2015.

"Ebola is not kind to a disorganised healthcare system as we have in Ghana. It kills almost all of its victims. Any government that entertains the thought of importing Ebola is an uncaring one and should be resisted", the pressure group stressed.

These are the other reasons the OccupyGhana movement cited regarding their call for government to put to rest plans to host  the AFCON next year:

1. INCOMPETENCE AND CORRUPTION AT THE GHANA FOOTBALL ASSOCIATION.

Management of Ghana Football Association, its hirelings and Black Stars players have given first-hand accounts of mismanagement of resources in the run up to and during the World Cup in Brazil. We have not heard the last of the successively organised mismanagement by the GFA as well as the troubling Maputo Report which contained similar humongously corrupt acts.

Instead of rushing to host another tournament, the GFA and the Ministry of Sports should be focusing on rebuilding Ghana's tattered reputation in international sports.

2. A CULTURE OF UNACCOUNTABILITY AND MISMANAGEMENT AT THE MINISTRY OF SPORTS.

The Dzamefe Commission is still sitting and uncovering the sheer rot and waste of the taxpayer's money in Brazil. The nation had a collective gasp at the incredulity of a private person spending $20,000 of our money in Brazil to seek directions to a groceries market. Until and unless the many cases of financial mismanagement are explained, those responsible dealt with as prescribed by law, and robust systems and processes put in place to stop their recurrence, the Sports Ministry cannot be trusted with the execution of any international sporting event.

3. OUR HUGE FISCAL DEFICIT
Ghana's fiscal deficit stands at Ghc10bn. Government is spending more than it can afford so much so that critical services such as health and education are not receiving their statutory funding. There was no parliament-approved budget in 2015 for AFCON. In the face of huge Eurobond borrowing as well as an imminent IMF bailout, there is no financial justification for a single pesewa of government's already scarce revenues being spent on an avoidable, unnecessary, unbudgeted leisure event.

The Ministry of Energy has given up on managing the little power it has inefficiently left us with as we now have full 24-hour power outages running several days in a week. The cost of business soars as a consequence – it is not only 5-star internationally branded hotels but the small kiosk hairdresser who now also requires a diesel generator to stay in business.  Our manufacturing sector cannot compete at the low cost of production of foreign competitors whose products flood our markets, which is in part due to the higher cost and unreliability of power in Ghana.

For the duration of a sporting event such as AFCON, electricity demand will surge as people gather in front of TVs at precisely the same time of day to watch games. Our erratic and low supply cannot cope with such demand without switching off power to the productive sectors of the economy, and by it, negatively affecting economic output and growth.

5. MISPLACED PRIORITIES.
This and previous governments of our dear Republic of Ghana need to understand a fact:  FOOTBALL IS NOT A MATTER OF LIFE AND DEATH. Football is not a developing nation's greatest priority.

The breaking of Bank of Ghana rules, the flouting of Ghana Revenue Authority laws, the disregard of international money laundering best practice guidelines to ferry $4m in cash to footballers and to pay the expenses of party foot soldiers in Brazil while turning off power to VALCO because of a football game, all show grossly and embarrassingly misplaced priorities.

We elected the government to prioritize education, health, sanitation, transport, energy, to keep our currency stable and inflation low, to create an enabling environment for private business to thrive. Football did not appear in any 2012 political party manifesto as a matter of national priority: stop making it so.

In summary, even if there was no Ebola epidemic, AFCON 2015 is not our headache.  Why is our government contemplating forcing Ghanaians to swallow bitter medicine for someone else's headache? We shall not allow you to force this down our throats.

The Minster of Youth and Sports' position opens himself up to accusations of attempted corruption. There can be no justification for taking on AFCON 2015 for all the reasons elucidated above other than another opportunity for some to also create loot and share and probably cry.

Our strong disapproval for AFCON 2015 in Ghana will be expressed directly to CAF and FIFA. Perhaps they will see sense sooner than Government of Ghana to withdraw their ill-thought out request.