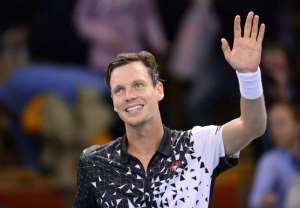 The top seed completed a 5-7 6-4 6-4 victory over the defending champion in Sweden to claim his second tournament triumph of the season, and his second title in Stockholm.

Berdych's victory moves him closer to a place in the end-of-season competition in London, sending him back above Andy Murray and into seventh position after the Briton had earlier won the Vienna Open against fellow hopeful David Ferrer.

The Czech looked in control of the opening set after a break of serve saw him lead 5-3, but he allowed Dimitrov back into the match and the Bulgarian capitalised to win four games in a row to take the set.

He was unable to maintain that momentum, though, as Berdych broke in the opening game of the second, which enabled him to go on and level the match.

Berdych was particularly strong on his own serve, allowing Dimitrov to win just six points, while sending down four aces to claim the second set.

A lack of concentration at the start of the decider cost Dimitrov as Berdych pounced on his second chance to break.

With victory in his sights the world number seven ended Dimitrov's hopes of defending his title with a final huge ace to take the match.