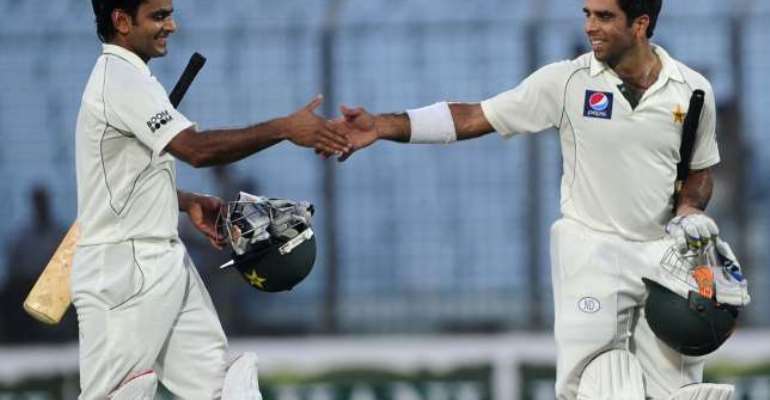 Left-hander Taufeeq could make his first five-day outing in more than two years after winning a recall, while the experienced Hafeez is also back in favour having been overlooked for a two-Test series with Sri Lanka in August.

Pakistan have named a 16-man squad to face Australia in the United Arab Emirates, yet there is no place for Khurram Manzoor, who opened with Ahmed Shehzad in the aforementioned contests against Sri Lanka.

Umar Akmal and Abdur Rehman also make way, together with the unfit Junaid Khan and Wahab Riaz, while Saeed Ajmal remains suspended after he was found to have an illegal bowling action.

Three debutants are included in the form of batsman Haris Sohail, a centurion in Pakistan A's victory over the touring Australians this week, wrist-spinner Yasir Shah and fast bowler Imran Khan.

Chief selector Moin Khan said: "The side has been picked in consultation with captain Misbah-ul-Haq and head coach Waqar Younis, and there is complete agreement that these are the 16 best available players to represent Pakistan.

"Openers Taufeeq Umar and Mohammad Hafeez have been recalled due to their experience. Taufeeq has hit seven centuries, holds an average of just under 39 in 43 Tests and has the experience of playing against Australia and in the UAE conditions.

"Furthermore, he showed decent form in his last first-class match [for Sui Northern Gas Pipelines Limited earlier this week] when he contributed 80 runs in a winning cause.

"Mohammad Hafeez has been recalled as he is an experienced player. Then, in the absence of Saeed Ajmal, Hafeez gives the captain an extra spin option. When you combine Taufeeq and Hafeez, between them they have played 79 Tests, and scored 5,117 runs with 12 centuries.

"The bowling is relatively inexperienced due to the non-availability of Junaid, Wahab and Saeed. But this is an opportunity for the likes of Imran, Rahat [Ali], Ehsan [Adil], [Mohammad] Talha and Zulfiqar [Babar] to prove their mettle against some of the best. They are extremely talented bowlers with a promising future and deserve selection.

"The selectors had considered Mohammad Irfan but decided not to include him in order to preserve him as we need to carefully manage his workload with the ICC Cricket World Cup 2015 just four months away. The selectors believe he will be a formidable force on the hard and bouncy Australia pitches."

Pakistan face Australia in Dubai from Wednesday, with the second Test taking place in Abu Dhabi the following week.