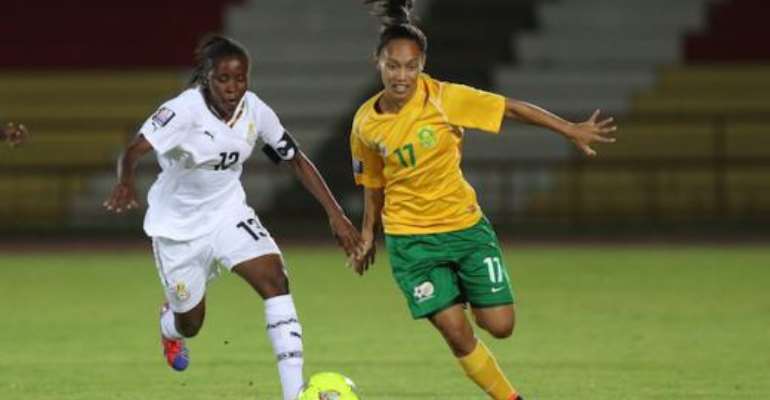 South Africa and Ghana are both in danger of being eliminated from the Africa Women Championships in Windhoek, after playing to a 1-1 draw at the Independence Stadium on Wednesday night.

Octavia Nogwanya put South Africa ahead on 16 minutes but Elizabeth Cudjoe equalised for Ghana in injury time of the first half.

The result sees both teams at the bottom of Group B on one point each, while Cameroon lead the log on six points with Algeria second on three points.

South Africa came out attacking with Leandra Smeda and Portia Modise making early inroads before Nogwanya gave them the lead when she tapped in a loose ball after an error by Ghana's goalie Fafali Dumahisi, who failed to hold a high ball.

South Africa continued to attack with Smeda, Modise and Mamello Makhabane all coming close to scoring, but they could not find the net.

Ghana, who had few chances of note in the first half, caught South Africa off guard on 46 minutes when an unmarked Elizabeth Cudjoe received the ball at the far post to tap the ball into an empty net.

The tempo picked up in the second half as both teams went in search of the winner.

Agnes Aduako missed a great chance for Ghana when she missed a cross by Cudjoe with an open goal mouth gaping, while Smeda headed narrowly over the bar from a Modise cross.

Nompumelelo Nyandeni came close for South Africa with a long range effort that was tipped over the bar, while a long free kick by Janine van Wyk was just saved by Dumahisi.