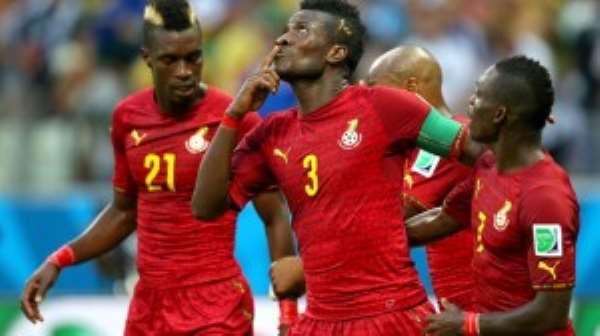 The Black Stars were gritty when they withstood pressure from the talented Guinea squad to win the match and extend their lead in the qualifier for next year's tournament in Morocco.

Strong tactical display in defence as well as an assured midfield showing helped the Black Stars to defeat the visitors having drawn 1-1 in the first-leg match played in Morocco on Saturday.

Konadu's substitutions also helped the Black Stars shore up the midfield at the time the side was under pressure which resulted in a counter-attack that sealed the late goal by Emmanuel Agyemang-Badu.

Gyan has hailed the tactics of Konadu saying it helped them to seal the important victory that will steer the side to qualify for the tournament in Morocco.

“We knew they are very good in possession of the ball. When we went up by two goals to one, the coach changed the tactics. He had to take Jordan out to make sure we had some defensive midfielders,” Gyan said.

“We really worked hard. Everybody was running. We were compact today. And I think that tactically we were so good today

“We still focus on qualifying to the Africa Cup of Nations. It's very important for we Ghanaians. Although we've won today and lead the group, we have to make sure we go back to our clubs, come back with a winning mentality and make sure we win the next game.”

Ghana cemented their place at the top of their group after edging to victory past Guinea on Wednesday in Tamale in the 2015 Africa Cup of Nations qualifying.

The Black Stars, making their debut at the Tamale Stadium, took their point tally to 8 from four games with two more matches left in the Group E campaign as Maxwell Konadu's side won 3-1.

Goals from Asamoah Gyan, Andre Ayew and Emmanuel Agyemang Badu sealed first win for Konadu, who is in temporary charge.