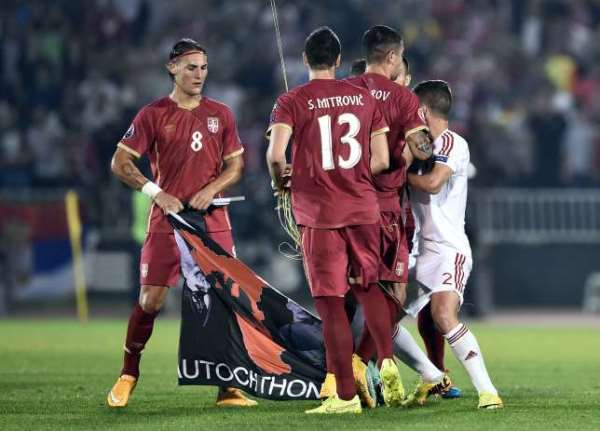 Referee Martin Atkinson was forced to abandon the Euro 2016 qualifier between Balkan rivals Serbia and Albania after a pitch disturbance at Stadion Partizana amid political tensions between the two nations.

Scores were level at 0-0 when a drone flew over the pitch carrying a banner that appeared to feature an Albanian flag and slogan in the Serbian capital, where visiting fans were refused entry.

An on-field scuffle involving both benches then broke out when Serbia defender Stefan Mitrovic attempted to bring the banner down, leading to fans entering the pitch.

Police surrounded the pitch as players were escorted from the field before the Group I encounter was called off.

"We came to play football, but we were physically attacked by Serbian fans and therefore did not want to return to the field," Cana is quoted as telling Kosovar television broadcaster Kohavision.

"We wanted just to take the flag and everything would be under the control of the security to prevent spectators from approaching our bench.

"I defended team-mates and had injuries on my face, but there is also Taulant Xhaka."

UEFA confirmed it will investigate the abandonment but Albania goalkeeper Etrit Berisha has already turned his attention away from the match.

"It was unfortunate in this difficult situation, but now it's all over and we look forward only," he said afterwards.

We stand with Ayine against judicial tyranny, plans to gang ...
19 minutes ago