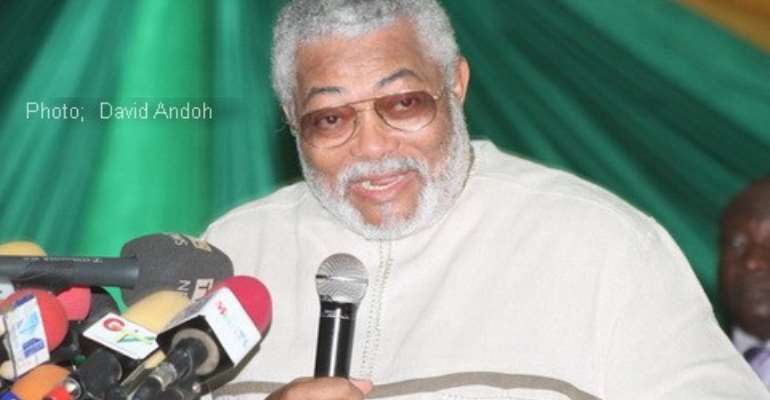 The former President and Professor Danso-Boafo are in a tango over a yet to be launched book titled, "J.J. Rawlings and the Democratic Transition in Ghana".

Mr Rawlings had initiated the court action to restrain the publishers from going ahead with the book launch but later pleaded for the matter to be settled out of court.

The former President's counsel, Samuel Atta Akyea, informed the court presided over by Justice Mustapha Habib Logoh at the last sitting that his client was exploring the possibility of getting the matter resolved amicably.

According to him, there have been efforts between his client and the defendant to settle the matter out of court. He prayed the court to give them time to attempt a set­tlement, after which they would return to the court and inform the judge whether or not they were successful.

According to Atta Akyea, the former President had expressed his willingness to meet Prof Danso-Boafo, former Minister of Health under Mr Rawlings' administration.

He said both counsels had met and that Prof Danso-Boafo could decide the forum for the meeting.

"If they are successful, then Rawlings would have found his friend again," Atta Akyea told the court amidst laughter.

The case was therefore adjourned today, October 9, 2014. Rawlings was represented in court by Kobina Andoh Amoakwa of the office of the former President, while Prof Danso-Boafo was in court.

Alex Quartey was counsel for the defen­dant.
The book was initially scheduled to be launched on August 20, 2014 but Mr Rawl­ings demanded that the event be cancelled altogether, accusing Professor Danso-Boafo of bad faith by reneging on an earlier agree­ment reached on the book.

Mr Rawlings in his affidavit in support of the motion stated that Prof Danso-Boafo had undertaken to wait for him (Rawlings) to review the book and correct all factual inaccuracies in it but "has breached his own solemn undertaking with me and has pub­lished it with the view to launching it."

Prof. Kwame Danso-Boafo
However, Prof Danso-Boafo said he nei­ther attacked the personality of Mr Rawl­ings nor published anything untoward about him in the book.

The defendant in his affidavit in opposi­tion to Rawlings' claims, said the book was not intended to and does not bring Jerry

Rawlings and his-family into disrepute but was rather authored from an "intellectual perspective and fair analysis of historical events which occurred during the plaintiff's (Rawlings') public life from military rule through transition to democracy and writ­ten in a very objective light."

Prof Danso-Boafo's affidavit said the author after completing the book, gave Jerry Rawlings a copy to proofread but the for­mer President, after keeping the copy for well over two years, had not been able to point out a single sentence he finds unac­ceptable in the book.

He said even in the affidavit filed by lawyers of the former President, Zoe, Akyea and Co, led by Samuel Atta Akyea, MP for Abuakwa South, they could not exhibit proof of a single page which contains the alleged 'several inaccuracies, misinforma- ! tion and slants which has the potential to poison Ghana's historical records and dem­ocratic evolution.'

The book, according to the author, was intended to "put in the public domain the holistic history of what happened in Ghana under the plaintiff's rule as Head of State, I matters which are of public interest, enquiry and debate."

It said the late South African President, Nelson Mandela, in writing his foreword of the book said it is a "must read for all Africans", therefore emphasising the public interest quality of the book.