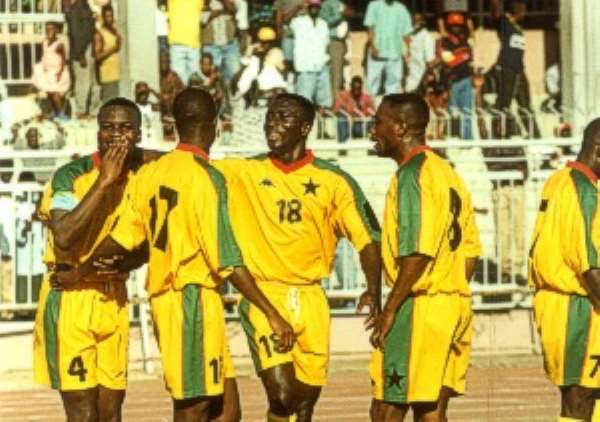 The hankering to add their name to the 32 countries, come 2006 in Germany, continues as Ghana's Black Stars engage their South African counterparts, Bafana Bafana, in the Group 2 World Cup qualifier at the Kumasi Stadium tomorrow. The Black Stars began the 2006 World Cup campaign on a bad footing by losing 0-1 to the Stallions of Burkina Faso in Ouagadougou a forthnight ago, even though the team demonstrated a high sense of marksmanship in that encounter. The writings are visible on the wall that the World Cup train will not leave us behind this time, considering the array of stars in camp at the moment. However, complacency on the part of the Stars can cost the Nation once again. It is for this reason that Stars technical chief, Mariano Barreto, has cautioned his charges to approach the rest of their matches with all seriousness, especially tomorrow's battle. The South Africans have since '94 been tougth customers for the Stars, and Coach, Baxter, has promised a real showdown in tomorrow's battle. In like manner, the crop of stars at Baretto's disposal, coupled with good tacttics, should make it possible for the Ghanaian side to tower above their opponents to brighten their chances of making it to Germany for the first time in the World Cup.
The Black Stars, having missed the train to the world's biggest festa for serveral decades, are battle-ready to break that jinx this time round.
In a camp where stars like Stephen Appiah, Charles Taylor, Ibrahim Tanko are in attack, you can trust defenders like Samuel Osei Kufour, John Mensah, Dan Quaye, Richard Kingston, among others, to erect a barricade in the path of Bafana Bafana.